If you’re planning on hiking in the Adirondacks this weekend you’ll want to bring some snowshoes or skis with you! Check out the latest info with the winter weather, trail conditions, and more. 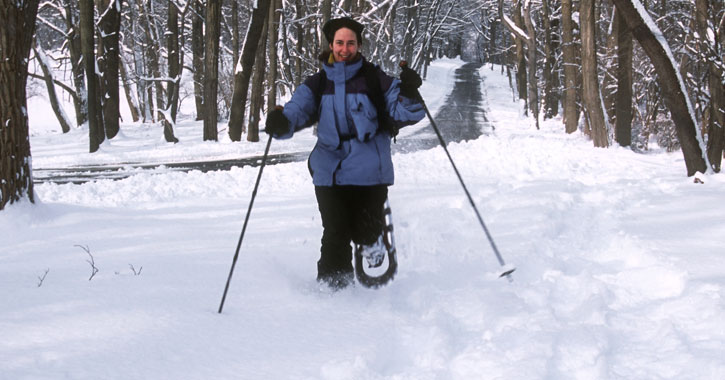 Below freezing temperatures, snow, and ice are present at all elevations. Be prepared for wintery conditions by adhering to the following:

Temperatures will be colder with winds stronger at the summits. You’ll want to wear a jacket or coat (outer shell), a hat, and gloves or mittens that will block wind. Avoid skin exposure while on the summits. Carry extra layers of noncotton clothing specifically for the summits.

The recent snowstorm has provided excellent conditions for outdoor recreation in the Adirondacks. When arriving with proper clothing and equipment for snow, ice, and cold weather, outdoor recreation enthusiasts can have a safe and enjoyable time.

“Now that snow has arrived in the Adirondacks, visitors can take advantage of all the winter recreation opportunities in the park,” DEC Commissioner Basil Seggos said in a statement. “However, winter can also present dangerous – even perilous – conditions to the unprepared. Visitors exploring the backcountry should dress for cold weather and use snowshoes and skis to navigate trails where appropriate.”

Most gates and designated snowmobile trails in the western and central Adirondacks are or will be open by the weekend, including the Moose River Plains and the Seventh Lake Mountain snowmobile trail, and Lake Pleasant.

Other trail systems are being checked for blowdown, washouts, and other problems. They’ll need additional snow before opening. Snowmobilers should check on local trail conditions before heading out.

Wear proper footwear, including traction devices, especially on steep sections of trails and at water crossings where rocks might be covered with a layer of ice. Snowshoes or skis are strongly encouraged wherever snow depths are higher than eight inches.

Using snowshoes or skis on trails eases travel while on snow, and also prevents “post holing,” which can ruin trails and cause sudden falls and injuries. Ice crampons and traction devices should be carried for use on icy portions of trails, including on the summits and other exposed areas.

You can expect to encounter blowdown (fallen or hanging trees, limbs, and branches) on trails.

Remember that traveling through snow takes more energy and time that it would typically take to hike the same distance – this is especially true if it’s freshly fallen snow. Plan your hiking trip accordingly.

Remember the days are short now, and you should be carrying a headlamp or flashlight with you on all hikes. Make sure there are fresh batteries and bring extras. Don’t rely on your cell phone as a flashlight because the battery will drain quickly and you’d be unable to call for help.

All seasonal access roads are closed to public motor vehicles at this time. The use of these roads by motor vehicles can tear up and rut snowmobile trails and even the roads themselves.

The two trails through the Elk Lake Easement lands connecting to the High Peaks Wilderness and the Dix Mountain Wilderness are once again open. However, the Clear Pond Gate on the Elk Lake Road will remain closed through the spring mud season. This will add four miles to a roundtrip hike; prepare accordingly.

The gate on Corey’s Road will remain open until March 1st, however, the road and parking areas may not be plowed. If you do not have four-wheel drive, and there is snow on the ground, you might consider parking along the plowed section of road and walking. Do not block traffic here. Also, have a shovel in your vehicle in case you need to dig it out after a snowstorm.