The snow is coming down in many parts of the Adirondacks! Snow will be covering ice that is currently on hiking trails, snowmobile trails are likely to open back up, and there’s more to check out before you embark on your Adirondack adventure this weekend. 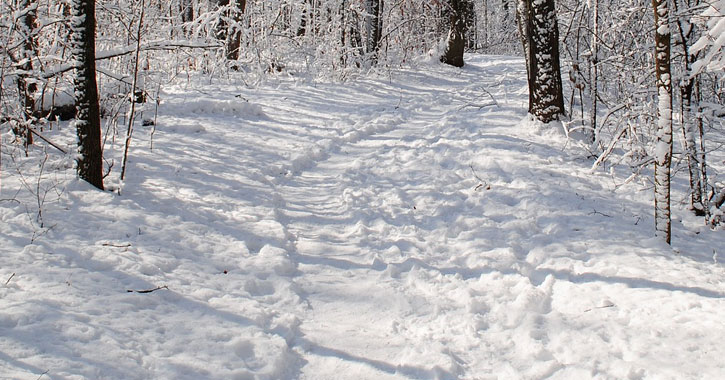 Late winter conditions are present in the Adirondacks. Above freezing daytime temperatures have resulted in a significant loss of snow pack across the Adirondacks, although this will likely change with snow forecasted for Friday and Saturday.

Current snow depths range from 6 to 10 inches, with deeper amounts in the higher elevations. The snowstorm is forecasted for Friday and Saturday is expected to bring up to a foot of snow across the southern and central Adirondacks and in the High Peaks region, up to 6 inches across the northern Adirondacks, and 1 to 4 inches in the eastern Adirondacks.

Weather conditions can and do change quickly, so check the forecast again before heading out. Be prepared for the cold weather and wet conditions by wearing a waterproof upper and lower outer shell, waterproof footwear, layers of synthetic or wool winter clothing (not cotton), and a hat and gloves or mittens.

Conditions at the summits will be more extreme than at the trailheads. Expect colder temperatures, strong winds, more ice, and deeper snow.

Low elevation trails have some bare ground, thin snows, icy surfaces, water, mud, or a mixture of all! Be prepared for a variety of conditions.

Trail crampons and other traction devices should be carried for use on lower elevation, less steep trails. Deeper, soft snows in the higher elevations will require the use of snowshoes. Snowshoes might be required in other locations as well on Saturday, depending on how much snow accumulation occurs.

Thick ice is present on high elevation trails, particularly on bedrock summits, steep rocky slopes, and other exposed areas. The thick ice will be covered by snow after the current snowstorm passes. Carry mountaineering or climbing crampons if you’re likely to encounter these conditions and use when warranted; trail crampons will be ineffective on the higher elevations.

Water Levels & Ice on the Water

Although water levels are receding, rivers and streams are running high and fast. Increasing amounts of ice have completely melted or thinned considerably. Newly formed ice is extremely thin and might be perched above the current water level of streams. Use extreme caution at all stream crossings. Do not try to cross through any cold, high, fast flowing waters.

Ice is thinning on lakes and ponds, especially over river channels and other moving water. The DEC has received and responded to numerous reports of motorized vehicles falling through ice. Water and slush are present on the surface of the ice under the snow and above the main surface of ice.

Always check the thickness of ice before traveling across it. Avoid and stay well away from ice that is over running water, near inlets and outlets, and near boathouses and docks, especially those with bubblers or other ice prevention devices. Remember that ice that can hold the weight of snow may not be able to hold the weight of a person or snowmobile.

Many gates and snowmobile trails have closed because of lack of snow. They are likely to be reopened this weekend, especially in the southern Adirondacks. Check local conditions before going out.

The days are slowly getting longer but you’ll still need to carry a headlamp or flashlight on all hikes to be safe. Make sure you have fresh batteries and carry extras. Do not rely on your cell phone as a flashlight because the batteries will drain quickly and you’d be unable to call for help.

There is 30 inches of snow at Lake Colden (elevation 2,750 feet) with up to 5 to 6 feet of snow in the higher elevations. Trail conditions for skiing continue to deteriorate. Snowshoes or skis are required wherever snow depths exceed 8 inches, which is basically everywhere above 2,800 feet.

Lake Colden and Avalanche Lake have water on the surface of the ice. Inlets and outlets continue to open and should be avoided.

Find out more about snowmobiling in the Adirondacks >>