Confirm business hours in advance.
Your Guide to the Adirondack Region
Enter Giveaways Advertise
Note: Adirondack.net is not responsible for posts and comments written by non-staff members.
Home  »  Camping  »  Check Out the Hiking & Camping Information to be Aware of for This Weekend in the Adirondacks: Sep 7 – 9

We’re currently on the cusp of summer and fall, so you’ll definitely want to check out the weather report and brush up on supplies to bring with you for hiking or camping. Read on to see what you need to know for recreating in the Adirondacks this weekend. 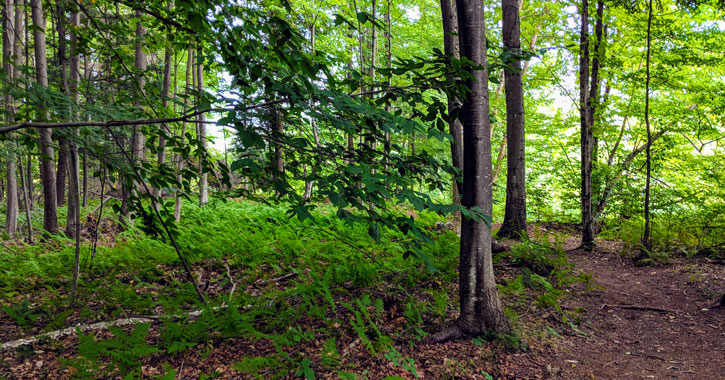 The weather will be cooler and less humid this weekend. Keep in mind the sun is starting to set earlier and rise later.

Nighttime temperatures are forecasted to be in the high 30s and low 40s for most of the Adirondack region, excepting the southern Adirondacks where they’ll be in the 40s and low 50s.

Hikers should start packing long pants and a jacket or fleece pullover with them on their trips. Campers should pack extra layers of clothing, a winter hat, and gloves.

Temperatures will of course be cooler at the summits, and winds will be stronger.

Trails may be muddy in some locations, especially in low spots, along water bodies, and in drainages. Avoid damaging hiking trails, trailside vegetation, and habitats.

Wear water-resistant hiking boots and let them get muddy. Stay in the center of the trail and walk through the mud and water.

Be a more environmentally friendly camper by using these packing and preparation tips:

Also remember to pack extra baggies to ensure you’re able to carry out all trash, including food scraps. Things like apple cores and banana peels that are tossed into the woods are often found by wildlife and can adversely affect wildlife eating and survival patterns. This can also attract larger wildlife, like black bears, to more populated trail areas.

Please help to keep the trails wild and beautiful, protect wildlife, and reduce wildlife conflict by always carrying out what you carry in.

Follow proper trail etiquette to maintain minimal impact on the environment and natural resources of the Adirondacks by following the seven principles of leave no trace.

Learn more about leaving no trace >>

The fire danger has gone from low last week to moderate this week. Be safe with campfires. DEC forest rangers have responded to a number of wildfires started by campfires that were not properly extinguished.

Use caution around steep, shallow, rocky streams and rivers. These are considered “flashy,” which means water levels can rise quickly and after a heavy rainfall. Water levels will also drop quickly after the rain has stopped.

Despite some recent rain, water levels remain low to very low in most streams, rivers, lakes, and ponds. Boaters and paddlers should be alert for objects on or below the surface that are typically covered by deeper water.

Nuisance bear activity has subsided in the Eastern High Peaks. However, hikers and campers should still follow practices to avoid negative encounters with bears.

If you are approached by a bear:

The use of bear resistant canisters is required for overnight users in the Eastern High Peaks Wilderness until November 30th, and is encouraged throughout the Adirondacks.

See more on bears and how to avoid encounters >>

Bugs are out and about in the Adirondacks, including black flies, mosquitoes, and no-see-ums (biting midges) – the black flies are particularly bad right now. Follow these steps to minimize the nuisance of biting insects:

Electric bicycles (e-bikes) of any class are not allowed on trails or roadways where public motorized access is prohibited.

Adirondack Classic Race (aka The 90 Miler)

The annual long distance paddling race takes place this weekend. You can expect to encounter hundreds of paddlers on the Adirondack Canoe Route between Old Forge and Saranac Lake as follows:

The triathlon race takes place this Sunday. Travelers in the area should use caution and expect delays. Road closures will affect roadside parking areas on Route 73 between Lake Placid and Keene, as well as roadside parking areas between Lake Placid, Wilmington, and Ausable Forks. Temporary road closures will begin at 5am approximately as follows:

SCA Adirondack Corps will be working on the Marcy Dam removal project beginning Monday the 10th with a planned completion date of Wednesday the 19th. Hikers are asked to stay away from rigging areas and follow flagging and signage for minor detours around the work site.

This is the fourth year of a five-year project to lower the dam spillway and allow Marcy Brook to return to a natural condition.

Group size regulations are in effect in the former Dix Mountain Wilderness. Groups should consist of no more than 15 hikers and no more than eight campers.

The DEC is undertaking a multi-year, comprehensive effort to promote sustainable tourism and address public safety in the Adirondacks, focused on the State Route 73 corridor between Exit 30 of the Northway and Lake Placid.

The Cedar Point Lean-to has been repaired and relocated by Lean2Rescue volunteers. The lean-to is now located on the southeastern shore of Lake Colden, off the trail about .2 miles from the Opalescent River. Camping is prohibited at the former lean-to site.

A primitive campsite with two tent pads has been developed in the Slide Brook Area south of Dix Mountain by volunteers from the NOLS Northeast Adirondack Service Expedition. The site is west of the trail just before the crossing of slide brook.

The Kagel lean-to has been relocated and reroofed by the Adirondack 46er Volunteer Trail crew. The lean-to is located a few hundred feet away from its previous location on a sustainable site away from the brook.

Camping is prohibited at the former location of the Boquet lean-to north of Dix Mountain and the open area adjacent to the trail.

The Bradley Pond lean-to has a 3-foot by 6-foot hole in the roof. The lean-to can still be used, but should be avoided if it’s raining. The DEC is developing a temporary fix for the 2018 season and will fully repair the roof during the offseason.

Group size limits are now in effect on the lands in the former Dix Mountain Wilderness. Groups should consist of no more than 15 hikers and no more than eight campers.

Now through October parking at the Garden Parking Lot costs $10 ($13 Canadian) per day. A town of Keene attendant will be at the lot from 7am until 7pm on Saturdays, Sundays, and holidays. Paying the fee is a self-serve process during the week.

Cold Brook Trail is not a designated DEC trail and is not maintained.

Blueberry Horse Trail is passable to horses and riders, however, riders should use caution near drainages and several stream crossings that will be muddy. The DEC is planning to improve the trailhead of this route in the future.

Many of the herd paths found on Mount Marshall and some of the other trail-less peaks meander around the slopes of the mountain without reaching the peak. Those climbing these peaks should navigate with a map and compass; don’t follow the paths created by others.

The Calkins Creek Horse Trail has two bridges out, making it impassable for horse drawn wagons and difficult for horses.

Several sections of the Pitchoff Mountain Trail, including the segment to “Balanced Rocks,” are severely eroded. These areas are challenging to navigate. Please use caution and turn back if it’s too difficult for your party to safely cross.

Discover more fun things to do in the Adirondacks >>