Residents of Saranac Lake, a small community in the Adirondacks with a year-round population of about 5,000, have come up with their own answer to an issue that has been inconveniencing them for almost a decade. This is a
heartwarming story that got national attention, having been highlighted by the
New York Times Business Day section back in November.

After the Ames department store went out of business in 2002, the closest place to buy basic necessities such as bedding and underwear was Plattsburgh, about 50 miles away. The community decided against a 12,000 square foot Wal-Mart store being built, which would likely put most local retailers out of business. Instead, the residents of Saranac Lake raised capital, and opened their own department store! 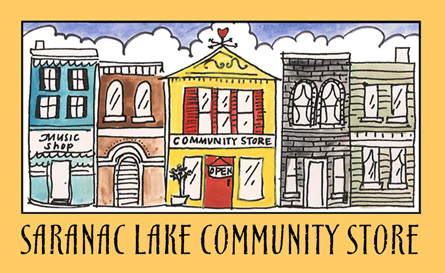 Photo Courtesy of the The Community Store in Saranac Lake on Facebook
By selling shares for the store (at $100 each) the organizers were able to reach their goal of $500,000 in just under five years. More than 600 people chipped in to take control of the future of the community, with an average contribution of $800!

The Saranac Lake Community Store officially opened to the public on October 29. By 9:30am the store was packed. Shoppers, contributors and generally curious people filed in to see what the deal was.

Saranac Lake is a town which believes that the volunteers in the community are what allows it to thrive. The day after the department store was opened, a local merchant was moving to a new location on Main Street. At 8:00 on a Sunday morning, more than 180 volunteers formed a human chain to pass the vendor’s merchandise to his new store. Wow, talk about a helping hand!

The residents aren’t even investing in this store for a profit, they just want to help the community. A similar department store in Wyoming, Powell Mercantile, does about $600,000 in annual sales, and even turned a large enough profit one year to pay investors $75 per share in dividends.

More common in Britain and the American West, community-owned stores are almost unknown on the East Coast. The Saranac Lake Community Store is the first in New York State. Small communities across the Northeast are keeping an eye on the Saranac Lake store in hopes of starting their own.

I would love to see stores like this popping up rather than large, nationally owned franchises like Wal-Mart driving small business owners out. I hope that communities in the North East see Saranac Lake as an example, and put local commerce back in their own hands.

What do you think?