The Wild Center has plans to build a multi-million dollar ‘Wild Walk’ so that visitors to this 31-acre site in Tupper Lake can “walk up into the Adirondack treetops.” 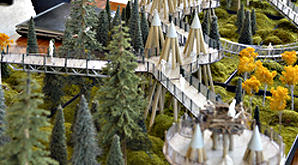 “We have worked on this Wild Walk project behind closed doors for five years,” said Stephanie Ratcliffe, the Executive Director at the Center. “We designed it so it could become an iconic symbol for this inventive and creative region.”
The Wild Walk will be a new outdoor experience that will take visitors on an 850-foot walk up into the Adirondack treetops on the Center’s campus. The planned structure is expected to cost $4.5 million and will include a network of bridges, raised platforms, tree houses, and other sometimes fanciful elements that the Center says are designed to deliver a fun and adventurous learning experience in the woods.

The Wild Walk idea was first conceived shortly before the Center opened. Since then, the plan has been refined and a scale model constructed to help people see the details of the Walk. The planned structure was designed by current staff and the team that developed the existing Wild Center.

The Wild Center has already invested close to $500,000 in the planning and development phase, and they recently received news that they would be awarded twice that amount from a government grant. The planned Wild Walk experience was among the projects named in the North Country Regional Economic Development Council’s (NCREDC) 2012 plan. The Empire State Development Council is the granting agency and has approved the $1 million grant toward the project. 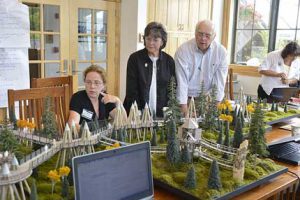 By expanding the Wild Center’s offerings, the project will help attract tourism to the North Country and also provide temporary construction jobs and year-round employment to area residents.

“We all feel honored,” said Ratcliffe. “Having the NCREDC refer to us in their Priority Project list as an ‘anchor’ for the region’s economy means that all of that work by so many is being recognized in a way that really matters. We’re just thrilled that the North Country’s council embraced it.”

The Wild Center has raised the funds for the planning and development phase and is currently raising the funds from private donors for the construction and exhibit costs.

“We plan a big event when we open the Wild Walk, and hope that all of the people who gave time to the NCREDC effort that is making such an impact on the region will join us, and give us the chance to thank them in person for the difference they are making,” said Lynn Birdsong, President of the Center’s board.