It’s sort of a strange idea – selling only gourmet olive oils, balsamic vinegars, sea salts, and accessories – but for the Saratoga Olive Oil Co., it’s proven genius over and over.

Though their flagship store, set in the heart of downtown Saratoga Springs, only opened in 2011, the Braidwood family has already expanded their business to Burlington VT, and just this month opened a new storefront in Lake Placid, NY. 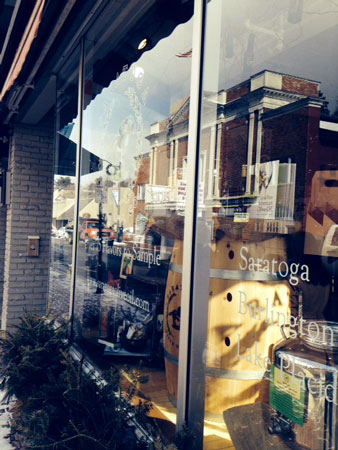 Clint Braidwood, co-owner of Saratoga Olive Oil, said that Lake Placid was a perfect location for another store. It’s quaint, but not too small, and has a vibrant culinary community. Like Saratoga Springs and Burlington, Lake Placid has year-round appeal.

Between the Olympic Center, summer adventuring, and fall sightseeing, Lake Placid has non-stop allure for visitors and locals alike. Braidwood emphasized that Lake Placid’s size was really what they were looking for, saying, “What’s so unique about main street in Lake Placid is that it’s small enough that every single person who walks down that street is seeing every shop on the street.” 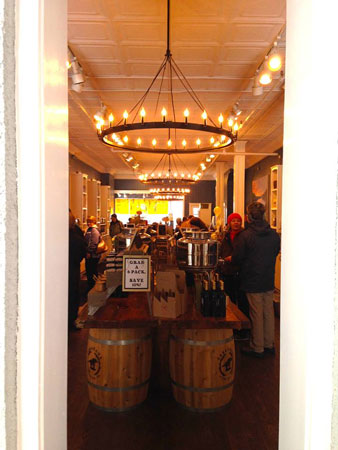 Catching foot traffic is crucial to the Saratoga Olive Oil company, as they offer free tastings of their products. Like a “create your own adventure” in foodie paradise, visitors can sample gourmet and infused olive oils, balsamic vinegars, and blended sea salts. Better yet, they can experiment and create combinations of all three.

There are endless combinations and something for every palate. If you have a sweet tooth, you automatically go for the Meyer lemon infused oil. Like it spicy? Try red cayenne chili oil. Feeling earthy? Taste the wild mushroom and sage oil. And don’t even get me started on the sea salts. One of them has bacon…have I said enough?

Saratoga Olive Oil is woven into the culinary tapestry of each community they serve. In Lake Placid, the store serves bread made fresh by the Whiteface Lodge. They also have programs for local restaurants to integrate the products into their menus, bringing local, gourmet influences to the table.

But the Saratoga Olive Oil Co. doesn’t stop at culinary ingenuity. They also have roots in the art community. The Lake Placid and Saratoga stores feature original artwork crafted by painter Tom Myott. While the artist was accustomed to painting vibrant scenes of the Saratoga Racetrack, Myott also created the serene scenes that you can see featured in the Lake Placid Store.

Each storefront also features artisan pottery accessories, like cruets, created locally. While the Lake Placid location is currently selling pottery made in the Saratoga area, Braidwood would love to talk to any Lake Placid and Adirondack potters about selling their products.

Clint said that the Lake Placid location is currently hiring up to 5 employees to serve as greeters and clerks. Each employee is trained on the products and pairings, so they can help customers choose the right oils and vinegar for their palate and use. Interested applicants should email

Do you have a favorite olive oil flavor or recipe? Let us know by commenting!