Scientists are concerned that an infestation that wiped out American chestnut trees in the 1900’s could possibly happen to eastern hemlocks in the Adirondacks, as well. YOU can make a difference in ensuring these trees stay safe! 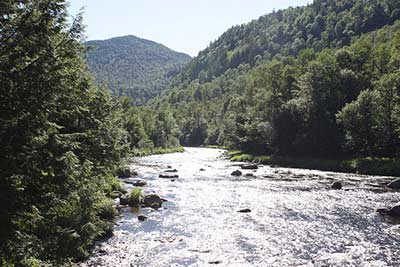 Unlike the fungal chestnut blight, the hemlock woolly adelgid, an insect from Japan, is causing concern for eastern hemlocks. This invasive species uses its long mouth parts to take in nutrients from eastern hemlock, western hemlock and Carolina hemlock trees. It does so by penetrating the bark at the base of a needle.

Unlike its relative, the balsam woolly adelgid, which has been present in the Adirondacks for nearly 10 years and hasn’t raised any concern, the presence of hemlock woolly adelgids carries potentially devastating effects.

Hemlocks are considered a “foundation species” which means they help create favorable conditions for other species. It is such a vital part of the ecosystem in the area, that it is extremely important to take proactive measures in ensuring its safety.

Cathy Pedler, a government relations and conservation associate with the Adirondack Mountain Club (ADK) told Lake Placid News, “Hemlock woolly adelgid is the one we’re most concerned about because of how insidious it is, of how devastating it is to control when there doesn’t seem to be any resistance to it in our hemlocks.”

Usually, tracking non-native species is easy as their range expands north due to a warming climate. However, the woolly hemlock algedid is much harder to track. It travels on wind, birds and other animals, so it is likely to appear almost anywhere, including the Adirondacks.

The threat of this insect is the main reason behind the Backcountry Forest Monitors project that came to be last year. Individuals in the program are trained how to look for evidence that the insect may be present.

The process for looking is simple: check the underside of a hemlock’s branches, where the needles meet the twigs and then document the findings on the iMap Invasives online database.

A sign that the tree could be infested is if several white, woolly dots are present on the tree. These dots can also be found in caverns on the bark, not to be confused with spider mites who also leave woolly dots, but are usually only found on the surface of bark.

If you see a dead tree, or large quantity of dead trees, make sure to report it! Reports can be made to ADK at 518-449-3870. It is much better to be safe rather than sorry when it comes to invasive species, especially the hemlock woolly adelgid.