For the first time since it opened in 1865, not one, but two prisoners escaped from the maximum security section of the Clinton Correctional Facility in Dannemora, NY over the weekend. A widespread manhunt is currently underway, and the state is offering a hefty reward for information leading to the criminals’ captures. 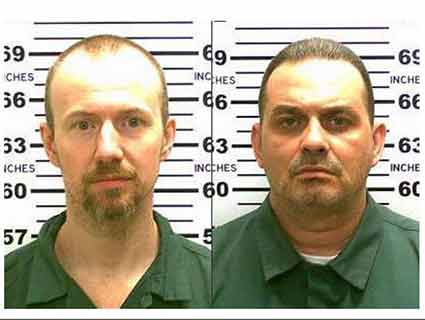 Photo Provided By The New York State Police
A plot that sounds like it was taken from a Hollywood script unfolded at the high-security prison when David Sweat, 34, and Richard Matt, 48 – both convicted murderers – used power tools and “cut through a steel wall of their adjacent cells, broke through two feet of brick and mortar, and sliced open a metal pipe before escaping through a street manhole over a mile away, The New York Post reports. The duo also used sweatshirts and other objects in their cells to make dummies that resembled their sleeping figures; this kept guards from initially realizing they were gone.

Authorities believe the prisoners may have gotten the power tools from a construction site at the facility, and also believe there might be multiple accomplices involved. During a news conference on Sunday, The New York Times reports that Governor Andrew Cuomo stated, “This is a crisis situation for the state. These are dangerous men. They are capable of committing grave crimes once again. The first order of business is to get these killers back.”

Because it is unknown how much time passed between the prisoners’ escape and the realization that they were gone, it is possible that the duo could be anywhere. Clinton Correctional Facility is only 20 miles from the Canadian border, so the men could even be out of the country by now.

Although Matt and Sweat are the first to escape from the facility’s maximum security side, escapes have been made on the other side of the prison, including the 1974 escape of Bernard C. Welch Jr. Welch who was re-arrested six years later after he murdered a cardiologist during a burglary.

To help expedite the capture of the two killers, the state is offering a $100,000 reward for information that leads to the apprehension of both men, or $50,000 for one. It has not been determined whether the men are still traveling together or if they have separated. Until they are found, take extra precautions to protect yourself while in the Adirondacks. Both Matt and Sweat have committed heinous crimes in the past, and it is possible they could strike again. If you have any information about the killers’ whereabouts, contact the New York State Police immediately.