On Saturday night, a fire broke out in a building in downtown Lake Placid, and it threatened one of the village’s most popular events of the year. 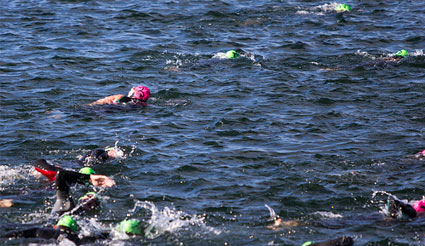 Photo Credit: Ironman Swim via photopin (license)
2,800 individuals and their families were in town for the Ironman triathlon that takes place in Lake Placid every year. The building that caught fire is located just a stone’s throw from Mirror Lake, where the swimming portion of the Ironman is held. As the fire was being put out, debris was ending up in the lake, which threatened the pre-planned course.

The blaze was successfully put out by firefighters from Lake Placid, Saranac Lake, and other surrounding towns, but not before one building was completely destroyed and another damaged.

Lake Placid News reports that Lake Placid police Chief Bill Moore described the Fortunes of Time building on Main Street as “a total loss,” while the neighboring Wanda building sustained less severe damage. Both buildings contained apartments, and a number of residents were displaced as a result of the fire.

The cause of the blaze is currently being investigated, and the Ironman triathlon went on as planned.

We currently know of one gofundme that’s been set up to help two of the apartment residents. Please let us know of any other donation information for displaced residents, and we will add it to this article!