After determining that measures to control predatory sea lamprey populations in tributaries of Lake Champlain were successful in 2015, the New York State Department of Environmental Conservation will continue the program this year. 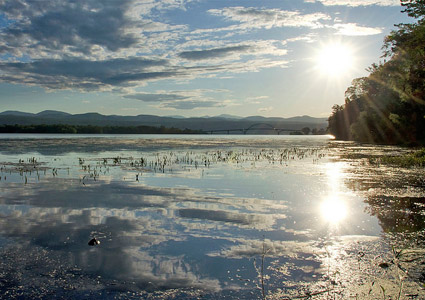 The eel-shaped lamprey prey aggressively on landlocked Atlantic Salmon and Lake Trout in Lake Champlain, attaching themselves to the host and draining its fluids. Because of the rate at which sea lamprey kills the host fish, the predators pose a significant threat to salmon and trout populations.

While there are multiple ways of accomplishing this goal, the group has found that the most effective is to apply lampricide – a pesticide – to streams where sea lamprey larvae generally live for around four years before invading Lake Champlain. The pesticide is not threatening to humans, although the water should not be consumed when treatments are applied.

Five tributaries – Mount Hope Brook, the Poultney River, Hubbardton River, Lewis Creek, and the Winooski River – were treated in 2015, and studies have shown salmon and trout populations have and will continue to benefit. In 2016, Putnam Creek and Beaver Brook are scheduled to be treated, while Mill Brook’s treatment was canceled when studies found no evidence of larval sea lamprey.

“It is encouraging to see the success of DEC and its partners in restoring Lake Champlain’s trout and salmon fisheries by effectively controlling sea lamprey numbers,” said Acting DEC Commissioner Basil Seggos in a statement. “We must remain vigilant in combating lampreys so our native fish populations can thrive and local communities can benefit from the outstanding recreational fishing Lake Champlain offers.”