Have you ever checked the weather forecast online or on an app and had a good laugh about the differences between the report and what’s happening outside your window? Thanks to a growing network of environmental monitoring systems that is spreading throughout New York State, those reports will be growing more and more reliable throughout this year and beyond. 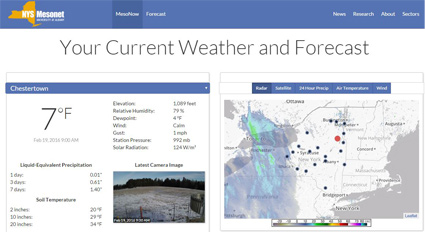 Data from NYS Mesonet (www.nysmesonet.org)
According to Adirondack Daily Enterprise, the New York State Mesonet (formed from the two words “mesoscale” and “network”) is a weather-monitoring system that “measures temperature, humidity, wind speed and direction, pressure, solar radiation, and soil temperature and humidity.” In short, it has the ability to make much more accurate forecasts, especially where extreme weather events are concerned.

The plan is to have Mesonet stations at 125 sites throughout the state by the end of 2016, with at least one in each of the 62 counties in New York. Each station has a 33-foot tower along with multiple underground sensors, and there are currently 21 operational units.

“In a real-time situation, one of the concerns is to know when to close the Thruway, for example, or major roads,” Atmospheric Sciences Research Center (ASRC) Science Manager Richard Brandt told Adirondack Daily Enterprise. “Often, it isn’t until there is a problem that they close the roads, but if you can do forecasting in enough detail that you see in the next half-hour that we’re going to get these events, they can close the road earlier and make it safer.”

The accurate data can also help farmers determine when ground temperatures are warm enough for planting, in addition to other practical applications. Hikers, climbers, and tourists will also benefit from checking real-time conditions and forecasts before heading out on adventures.

Those who are interested can visit the Mesonet website and see current weather and forecast information for each of the active station sites, along with recent camera images. “It’s a pretty exciting project for New Yorkers,” Mesonet Meteorological Research Technician Scott McKim told Adirondack Daily Enterprise. “A lot of science going on in their backyard.”