The Crown Point Historic Site has been mysteriously and erroneously left off the Knox Cannon Trail for nearly 90 years – until now. 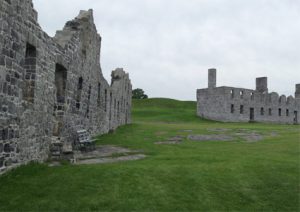 It’s been a long time coming – Friends of Crown Point State Historic Site were recently awarded a $7,212 state grant for a monument, finally allowing Crown Point to be added to the trail it was incorrectly left off of since 1929. The monument has been in the works since 2013, when New York Daughters of the American Revolution contributed $2,000 to the project.

Monuments were installed along the Knox Cannon Trail in the late 1920s, following the route Col. Henry Knox used to transport 59 cannons to the Boston area. With 29 out of those 59 cannons coming from Crown Point, clearly the historic site was an important piece of this part of history – and the trail – and it’s now able to be recognized as such with the construction of this new monument.

It is not clear why the site was originally excluded. Site Manager Michael Roets of Crown Point told The Sun Community News it may have been assumed all the cannons originated at Fort Ticonderoga; in fact, many cannons were moved from Crown Point to Ticonderoga.

Before the American Revolution even started, Crown Point was used by the French as a base for raids on nearby British settlements. Eventually the British took control, calling their new fortifications, “His Majesty’s Fort of Crown Point.”

When the Revolutionary War broke out in 1775, American colonists captured the fort and used it to secure cannons. Knox suggested to Gen. George Washington to transfer these cannons to Boston. They used barges, flat-bottomed river boats, and oxen-driven sleds to get the job done.

Washington seized control of Dorchester Heights outside of Boston in 1776, with Knox placing the cannon in position at that location. The British recognized the serious threat from the Americans, and subsequently withdrew from the city.

Today, Crown Point is committed to the preservation of these fortifications. Visitors are able to check out the protected ruins of the forts and tour the museum. The museum includes a multimedia program, models, and original artifacts. The site also allows access to the Crown Point Pier and the Champlain Bridge, with walking paths and amazing views of Lake Champlain.