Please contact businesses to confirm their hours before visiting. Click here for FAQs on What's Open.
Your Guide to the Adirondack Region
Enter Giveaways Advertise
Home  »  Fun stuff  »  Bike the Rails This Summer For A Unique Outing

You’ve probably heard of paddle boats, maybe even ridden in one, but have you heard about their popular land cousin the rail bike? Later this summer, you’ll be able to try a rail bike out for yourself on the Saratoga & North Creek Railway (SNCRR) in Warren County. 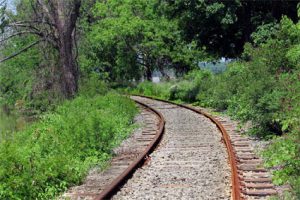 Rail bikes are human-powered vehicles with pedals, similar to a paddle boat, but they are situated on rail lines, allowing their riders to go on a leisurely trip along a train track.

The company Renegade Railriders will be in charge of the Saratoga & North Creek rail biking project, and it plans to have a soft opening on June 17 before being fully open to the public later in July.

Tickets will be $35 per person in the four-seated vehicles, and the three-hour long guided tour mainly moves along the Boreas and Hudson rivers.

Co-owner of Renegade Railriders Gus Kamp told the Post Star, “We are confident the whole experience from start to finish is something that people will never forget.”

In addition to it being a great experience, the economical impact of this new attraction will be positive for the region as well. SNCRR general manager Justin Gonyo expressed his belief to the Post Star that the new rail bikes will “produce a lot of foot traffic…produce a lot of jobs.” Renegade Railriders has purposely planned the rail bike schedule out so it won’t compete with tourist train traffic near North Creek and Saratoga Springs.

Are you excited to go on this new rail biking adventure?