Your Guide to the Adirondack Region
Enter Giveaways Advertise
Home  »  Community  »  Adirondack Turtle Population in Decline: How Can You Help?

The timeless tale of the tortoise and the hare reminds us that land turtles are slow moving creatures. Unfortunately, that places them at a much greater risk while on a busy road, and Adirondack turtles are in decline as a result. 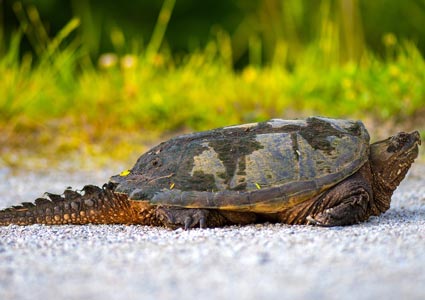 Here in New York State, there are 11 native species of land turtles, and the four most common ones in the Adirondacks are the snapping turtle, painted turtle, spotted turtle, and wood turtle. These four Adirondack turtles are semi-aquatic, so while they dwell in the water most of the time, you can spot them on land as well. Since turtles are cold-blooded reptiles, they often bask on logs or near their aquatic habitat.

You can identify Adirondack turtles by looking for the following features:

1. Snapping Turtles have a large head and shell, a saw-toothed tail, stocky legs, and are shades of olive green.

2. Painted Turtles are small and easily recognizable by the red markings around the shell and yellow stripes on the head, neck, and limbs.

3. Spotted Turtles are small and commonly have yellow polka dots that cover the shell, head, neck, and limbs.

4. Wood Turtles are larger than painted and spotted turtles, but their shell is bumpier and has ring patterns similar in appearance to tree rings.

When you see one of these turtles travel on land, it is usually a female. Early June, or summer, is when many female turtles begin their nesting period and search for a place on land to lay and bury their eggs. Female turtles dig a small nest in soft sand, soil, or vegetation debris, lay their eggs, and then leave the babies to hatch and live on their own.

The problem with the turtles’ nesting period is that they sometimes build nests near roads or travel across them to find a suitable location. According to the Department of Environmental Conservation (DEC), thousands of turtles statewide are killed each year because of vehicles. It takes at least 10 years for a young turtle to be able to breed, so the loss of a pregnant female means a decrease in population growth over time.

The DEC has some tips to keep in mind if you see a turtle crossing the road:

1. Keep watch for turtles on the road, and drive slowly near aquatic habitats if you can.

2. If possible, avoid hitting a turtle if it is in line with your vehicle, but don’t endanger yourself or others.

3. If you are able to pull over and help a turtle, only move it to the side of the road where it was originally facing.

4. Most turtles are docile, however, if it is a snapping turtle, you should leave it alone because approaching one is too dangerous.

Although turtles face other external population threats, such as egg scavengers, habitat destruction and pollution, and even pet collecting, the death of a pregnant female by a moving vehicle causes the loss of another generation of turtles, which is significant.

Should you find yourself driving near a lake, pond, or other turtle habitat, remember to keep a lookout for our slow moving friends!

Learn more about turtles in the Adirondacks >>