Since 2002, the invasive emerald ash borer has made its way from southeastern Michigan to New York State. The jewel beetle infests and kills ash trees, and the population is now dangerously close to groves of white ash in the southern Adirondacks that are used to produce an iconic baseball bat. 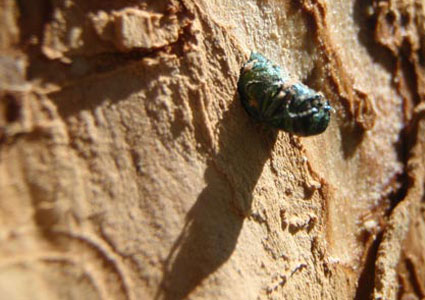 Photo Credit: Department of Environmental Conservation (DEC)
Emerald ash borers are iridescent, green beetles that are known to damage all native ash trees, including green, white, black, and blue ash. They typically grow to be just less than the size of a penny.

Recently, it’s been reported that emerald ash borer sightings are close to the Adirondack Park. The presence of small populations has been found in both Saratoga County and Oneida County, which indicates the invasive insect is still spreading.

One of the areas at risk of an emerald ash borer infestation is Dolgeville, located at the southern border of the Adirondacks. In the village, the Rawlings sawmill uses groves of white ash to make thousands of baseball bats every year.

Professional baseball players have used Rawlings ash wood baseball bats for decades. The “Shot Heard ‘Round the World” during the 1951 New York Giants vs Brooklyn Dodgers game was made by a Rawlings bat.

Rawlings plant manager Ron Vander Groef believes if more isn’t done to fight against the emerald ash borer, then the groves of white ash will be at serious risk. He told NCPR, “We will not be able to make any more pro bats or retail bats…and if we don’t do something quick with white ash in New York state, we’re only talking a matter of years.”

Unfortunately, federal funding is a major issue in the fight against invasive species. The fund used to combat them is also used to fight wildfires, and much of it has gone toward the latter. New York Senator Chuck Schumer supports a bipartisan bill that would contribute $300 million a year to fight the invasives, but there’s still a lot of work to do.

A widespread infestation of emerald ash borers across New York State would endanger thousands of trees, but there’s a way you can help. The DEC has asked swimming pool owners to participate in a Citizen Pool Survey to help identify invasive insects. There are five simple steps:

This Citizen Pool Survey is conducted annually to identify the spread of emerald ash borers and other invasives, including the Asian long-horned beetle. However, if you don’t own a swimming pool and believe there are emerald ash borers near you, send your photos and location information to the DEC email address listed above!