Please contact businesses to confirm their hours before visiting. Click here for FAQs on What's Open.
Your Guide to the Adirondack Region
Enter Giveaways Advertise
Home  »  Community  »  Why We Should Care About The Invasive Gypsy Moth

It may have been a while since you’ve read or heard about one of the most recognizable invasives in the Adirondacks — the gypsy moth. A destructive force in the 1980s, this voracious moth has already caused high defoliation in the Northeast and reached population levels not seen in three decades! 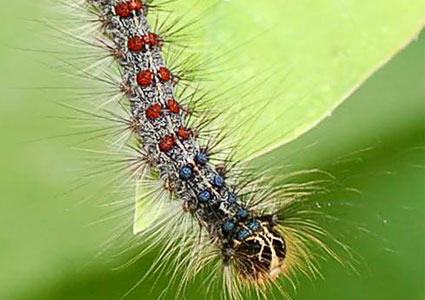 Photo Credit: NY Department of Environmental Conservation
Gypsy moths, an invasive species from France, hatch from their egg masses in spring. While in their caterpillar stage, gypsy moths have the potential to cause mass defoliation of oak, maple, birch, and many other types of trees.

Last year’s dry spring, combined with the long dry stretch this year, has resulted in high gypsy moth population levels that have caused the defoliation of thousands of acres of trees across New England and the Adirondacks.

In an Adirondack Daily Enterprise article, David Hanson, a Massachusetts farmer, remarked that the number of gypsy moths this year is reminiscent of the late 1980s when many trees died because of them.

Recent reports in the Northeast suggest there have been large concentrations of gypsy moth caterpillars. Some areas, such as New Hampshire, have had caterpillars but not much defoliation, while other places, such as western Rhode Island, have seen a lot more damage.

The reason for the gypsy moth’s growth this year is because its greatest threat, a fungus called entomophaga maimaiga, requires wet weather to grow, which was almost nonexistent in the early part of spring. The Northeast was hit by some late spring showers, but much of the damage happened earlier.

However, there is hope for next year. “We are now seeing widespread caterpillar mortality from the fungus,” said Connecticut State Entomologist Dr. Kirby Stafford in a CT Post article. The fungus, which infects gypsy moth caterpillars, began to grow in the latter half of spring and helped to reduce the caterpillar population.

If you want to help fight against this local invasive, then you should keep an eye out for the brown, fuzzy egg masses on trees. Knocking them down and getting them into soapy water will destroy the eggs. If you suspect a larger infestation, contact an exterminator and get the area sprayed before the damage is done.