Four local businesses, including the oldest continuously owned tavern in the Adirondacks, are under new ownership with big plans to serve the Adirondack region in style. Find out what’s new on the business and restaurant scene! 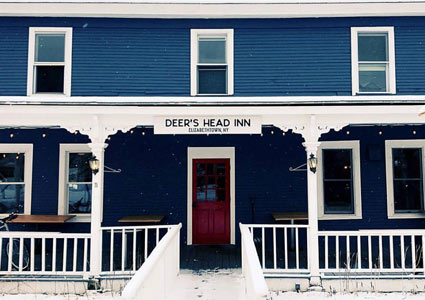 “It was a huge undertaking,” Ladeau told the Sun Community News. “I had been in the store before it closed (last year) and I thought about it and decided to do it.”

Ladeau also owns car washes and laundries in Crown Point and Port Henry. Michael Shaw, the new store manager, has managed several Stewarts shops around the North Country. With both men having significant business experience the country store is looking to do quite well.

The country store has a deli with Boar’s Head meats, sandwiches, wraps, cold cuts, and hot foods like soups, chili, and mac and cheese. They also have a bakery with doughnuts, muffins, rolls, breakfast sandwiches, and more.

After being closed last winter, the Deer’s Head Inn has reopened thanks to Aaron Woolf and his wife Carolyn Sicher. You may have heard of Woolf before, as he ran for North Country’s House two years ago.

After losing that race, Woolf worked on producing documentary films, a passion he shares with bartender Ben Stechschulte, who is also a filmmaker and a photographer.

Woolf’s plans for North Country’s House in part led him to take over the Deer’s Head.

“It seemed to me that there were so many of the values I wanted to champion as our representative that found expression in the Deer’s Head,” he told North Country Public Radio.

Woolf and Sicher are pairing up with local farmers – a huge focus of the Deer’s Head is to connect to the food movement in Essex County and the Champlain Valley.

The menu on the Deer’s Head website is quite extensive, with breakfast, lunch, sandwiches, salads, cheese and charcuterie boards, and main dishes like duck and burgers. It’s mentioned that the menu is subject to change, as they work with what’s fresh.

The Deer’s Head is believed to be the oldest continuously operated tavern in the Adirondacks.

The former Holiday Lodge in Wilmington is reopening as the Pour Man’s Tap House, ideally by Christmas, with new owner Jesse Rogers.

The Pour Man’s Tap House will be a cozy, homey place in the mountainswhere guests can choose from about 20 beers that will be on tap. There will be two fireplaces, along with a newly remodeled bar and dining room.

Rogers was compelled to come back to his hometown after attending college in Cobleskill.

“I always came back to Whiteface and to the people here,” he told the Sun Community News. “Now I have the opportunity to give everyone a part of what makes this place so great: a place to be together in the mountains.”

Rogers is looking to have live music at his grand opening, the date of which is still to be announced, but should be sometime this month.

Later on, the new owner plans to add a general store to the restaurant and bar where he’ll sell products for outdoor enthusiasts. 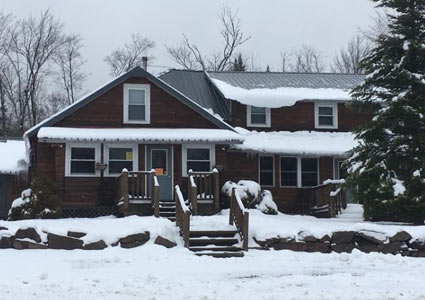 The exterior of The Little Fox, photo provided

Previously known as “The Wayback Inn,” The Little Fox in Eagle Bay is planning to re-open the restaurant and bar this winter under new management; “The Little Fox” is the original name of the establishment, and the new owner is bringing it back.

Proprietor Beth Kellogg will be the tenth owner of the property, and she is currently working to develop a menu with head chef Martin Coughlin.

The Little Fox will have a dining room that seats 50, and a large bar that can seat 50 as well. Additionally, there will be six bedrooms for guests. Kellogg is looking to appeal to those in the Adirondack Region who are visiting the area for popular winter activities, like snowmobilers.

Although looking to have a soft opening this winter, The Little Fox is planning on a grand opening in early spring.