Your Guide to the Adirondack Region
Enter Giveaways Advertise
Home  »  Events  »  Nominate Your Next Winter Carnival King & Queen and Check Out This Year’s Poster!

With just over a month to go until the Saranac Lake Winter Carnival, we’ve got two big updates from the Winter Carnival Committee to share! It’s once again time to submit your nominations for King & Queen, and cartoonist Garry Trudeau has come through with another fantastic poster design to go with this year’s theme of “Adirondack Wildlife.” 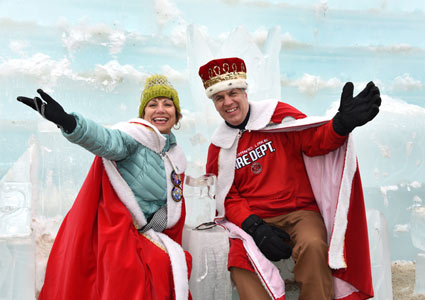 The selection of each year’s Winter Carnival King & Queen is based on community volunteerism. In a statement, the Committee described their ideal candidates as follows: “Candidates should demonstrate a long-term and broad-based commitment to making life more livable, pleasant, and enjoyable – both for the people who live here and for those who visit.”

If you know someone who actively volunteers to help out with tasks big and small and who does so independently, not because of their profession, nominate them to be this year’s King or Queen!

Each nomination should be submitted separately and must include the candidate’s volunteer history. Nominations must be signed by the person submitting them and received by the Committee no later than January 19, 2017.

On January 20, all past kings and queens assemble to select the new royalty. Final selection is by secret ballot, and the winners are announced at the coronation ceremony on February 3, the first day of the Carnival.

Mail your submissions to the Winter Carnival Committee, Attention: King/Queen Nomination, P.O. Box 829, Saranac Lake, NY 12983 or drop them off at the Adirondack Daily Enterprise (54 Broadway) or the Saranac Lake Area Chamber of Commerce Office (193 River Street). No electronic submissions will be accepted.

Since 2012, “Doonesbury” cartoonist Garry Trudeau has created the Winter Carnival poster design. This year, Trudeau – who was raised in Saranac Lake – portrayed “Doonesbury” character Zonker in a canoe amid wildlife and a dramatic mountainous backdrop. 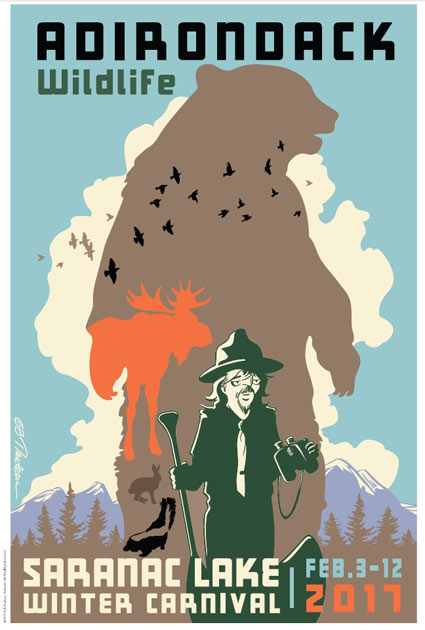 100 posters signed by Trudeau will be available to purchase for $65 beginning on January 2. Unsigned posters are available for $15 at Ampersound (52 Main Street) and the Saranac Lake Area Chamber of Commerce.

/*]]>*/
. Those who have purchased signed posters in the past should contact Dickson beginning on January 2 to continue the series. Unclaimed numbered posters will be made available on a first come/first served basis to those who have contacted Dickson to be placed on the waiting list.

In keeping with tradition, a raffle will be held for signed poster #1. Sales are limited to 100 raffle tickets, which cost $5 each. Tickets are available from Dickson until the Carnival opens on February 3, then at the Carnival Headquarters until February 12.

Trudeau also designed this year’s Winter Carnival button. More details will be announced about the button once it is available for sale.