We’re continuing to experience cold temperatures, deep snow, and thick ice in the Adirondacks. However, temperatures are forecasted to be above freezing this weekend, and some recent snowfall has helped some “bony” areas of trails get filled in for better skiing conditions in the High Peaks Wilderness. Where are you hiking or recreating this weekend? 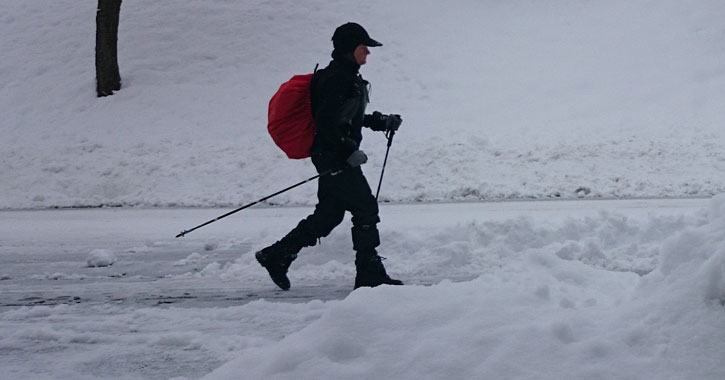 Below freezing temperatures, snow, and ice are present throughout the Adirondacks. Snow depths range from 8 to 15 inches, and will be even deeper in the higher elevations.

Temperatures are once again forecasted to be above freezing this weekend. We’re looking at low 40s on Saturday and mid-30s on Sunday. Here’s the specific forecast:

Weather forecasts can and do change quickly.

Remember that mountain summit conditions will be more extreme than those at the trailhead, with colder temperatures, stronger winds, lower wind chill temperatures, deeper snow, and thicker ice. The weather may be fairly mild at the trailhead, with sleet, heavy snow, and/or high winds at the summit. Bring extra layers with you and be prepared to turn around if the weather becomes too dangerous.

To adequately prepare for the weather wear the following: insulated, water resistant upper and lower outer shell; layers of synthetic or wool winter clothing; warm socks and winter boots; and a hat and gloves or mittens. Avoid cotton fabrics which hold moisture.

Use trekking poles for added support and balance when traveling on icy trails and summits. These are especially useful when you’re descending a mountain.

Prevent hypothermia by dressing properly, staying dry, and adding or removing layers to regulate your body temperature. Carry plenty of food and water. Eat, drink, and rest often. Being tired, hungry, or dehydrated makes you more susceptible to hypothermia.

Remember that it takes more effort and energy to move through snow and ice. It’s going to take you longer to travel through snow than it would the same distance in the summer. Choose trails that are within your and your group’s capabilities.

Thick, hard ice has formed on trails and especially at high elevations. Microspikes will offer minimal traction in these conditions.

Trails are in fair to good condition for skiing. Snowshoes should be carried for any hikes above 2,300 feet. Snowshoes or skis are required to be used in the High Peaks Wilderness (and strongly encouraged elsewhere) wherever snow depths exceed 8 inches. The use of crampons is also highly recommended.

Many rivers and streams have lost ice due to recent thaws. Ice moving over water may have only recently formed and is thin. Ice may be perched above the current water level of streams as ice formed when the water levels were higher. Use caution at stream crossings.

Ice is present on the surfaces of lakes and ponds. Layers of water, slush, and ice will likely be present above the main surface of ice.

Always check the thickness of ice before traveling across it. Avoid ice over running water, near inlets and outlets, and near boathouses and docks. Remember that ice that can hold the weight of snow cannot necessarily hold a person or a snowmobile.

Read up on ice safety >>

Gates are open and snowmobile trails are open for use. Snowmobilers should check local conditions before going out. Remember to slow down when passing skiers and snowshoers.

We’re still experiencing short days, so bring a flashlight with you on all hikes with fresh batteries and carry extra batteries. Don’t use your cellphone as a flashlight; it drains the battery and you’d be unable to call for help.

These principles include being considerate of other visitors and of wildlife (winter is an especially vulnerable time for wildlife), along with other important trail etiquette practices.

View all Seven Principles of Leave No Trace >>

Trails have improved due to recent snowfall.

Lake Colden has 24 inches of snow along the shores and 3 to 4 feet in higher elevations. Lake Colden and Avalanche Lake are crossable but ice around the inlets and outlets of both lakes should be avoided.

Snowshoes are required beyond Marcy Dam and on all trails where snow depth is 8 inches or deeper.

The Avalanche Ski Trail is in good conditions thanks to the caretaker’s efforts to fill in the bony areas with snow.

South Meadow Lane and Marcy Truck Trail are in fair condition for skiing.

Water levels in high elevation brooks remain higher than usual. Use caution at crossings such as Uphill Lean-to, Indian Falls, and others.

The use of wood burning stoves is prohibited in the Eastern High Peaks. The ban of campfire applies to any type of use of wood as fuel to protect the trees and other vegetation from being damaged.

A small section of the Whiteface Mountain Trail just above the junction with the Whiteface Highway (Wilmington Turn) has been rerouted to avoid the hazard created by variable ice conditions and the “rock cut” of the highway.

A small section of the Whiteface Mountain Trail just above the junction with the Whiteface Highway (Wilmington Turn) has been rerouted to avoid the hazard created by variable ice conditions and the “rock cut” of the highway.

The DEC is reminding snowmobilers that only Wolf Pond Mountain Road and Liberty Road are open to snowmobilers. Recently, snowmobilers have been illegally using Goat Path Road, Piney Ridge Road, and D & H Road, which are being used by logging trucks. These, and all other roads except for the aforementioned two, are closed to snowmobilers.

DEC Region 6 Operations staff has replaced the Morgan Road Bridge on a snowmobile trail in the town of Colton with a portable bridge. This bridge had been damaged by an overweight vehicle. The DEC will be constructing a permanent bridge in the future.

Lake Lila Road is closed to public motor vehicle access until the end of the spring mud season. Hikers, snowshoers, and cross-country skiers may use the road but are prohibited from trespassing on adjacent private lands.

An Interim Access Plan for the Boreas Ponds Tract identifies access and recreational opportunities that are available prior to the classification of the tract and development of a unit management plan.