Thick ice is present on most trails, snow and below freezing temperatures are forecasted for the weekend, and a number of snowmobiling trails are closed. See what you need to know to have a safe and enjoyable weekend recreating in the Adirondacks. 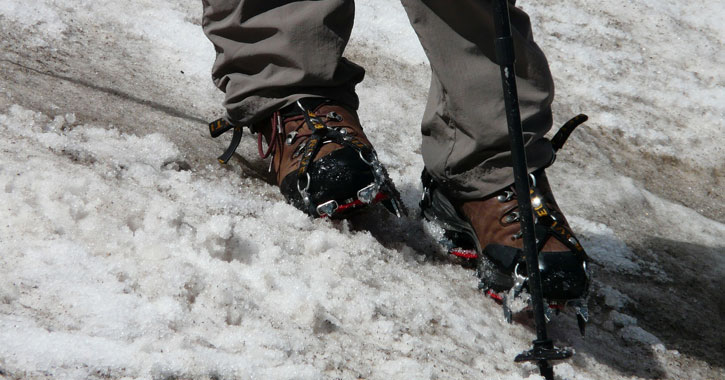 Below freezing temperatures, snow, and ice are present throughout the Adirondacks. Snow depths range from 10 to 12 inches.

Snow showers are forecast through the weekend with accumulations of 1 to 2 inches, with more in the higher elevations.

Prepare for the Cold

Below freezing temperatures can mean frozen snacks and water. Prepare snack bars ahead of time by cutting them into chunks for easy consumption if frozen. Pack Nalgene bottle in a thermal case to avoid freezing. Water in tubes of Hydration bladders can freeze quickly – keep the valve tucked into your jacket, insulate the tubing, and bring an empty water bottle as a failsafe.

Wear a waterproof upper and lower outer shell, waterproof footwear, layers of synthetic or wool winter clothing (not cotton), and a hat and gloves or mittens.

Keep emergency essentials in your backpack, as this is especially important for winter hiking. Include a pocket knife, duct tape to patch ripped jackets or broken poles, headlamp for unexpected trips out in the dark or overnight stays, space blanket, hand and feet warmers, emergency whistle, first aid kit, fire-making tools, extra layers, and socks.

The recent cycle of thawing and re-freezing weather has caused hard, thick ice to form on trails and especially at the high elevations. The use of crampons is strongly advised. Microspikes are suitable on level ground, but not on trails on slopes. Bring snowshoes in case deep snow is encountered.

Use trekking poles for added support and balance when traveling on icy trails and summits. These are particularly helpful when descending trails.

The DEC is advising hikers to review a trail map prior to your trip to become familiar with specific junctions, markers, or trail changes. It can be easy to miss a sign or marker on a trail in the winter, so familiarizing yourself ahead of time will allow you to remain aware and on the lookout. Bonus tip: Bring the map with you.

Remember that weather conditions can alter your plans and you should always be prepared to spend an unplanned night in the woods before entering backcountry. Backcountry hiking trails can be rugged and rough – they are not maintained like park walkways, so wear proper footwear.

Stream crossings may be impassable. Prepare to take alternate routes or turn back if you need to. Recent thaws, icy conditions, and very cold water, fast-moving streams should be avoided. Keep dogs on leashes near fast-moving water.

Ice is building on rivers and streams. Ice over moving water is thin. Beware of perched ice and use caution at stream crossings.

Ice is solid and there is little to no snow cover on most ponds and lakes. Always check the thickness of ice before traveling across it. Avoid ice over running water, near inlets and outlets, and near boathouses and docks, especially those with bubblers or other ice prevention devices.

Snowmobile clubs have closed most of the trail systems in Fulton, Saratoga, and southern Hamilton Counties due to the lack of snow and the amount of ice and bare patches on the trails. These conditions can be found throughout much of the Adirondacks. Check local conditions before going out.

We’re still experiencing short days, so bring a flashlight with you on all hikes with fresh batteries and carry extra batteries. Don’t use your cellphone as a flashlight; it drains the battery and you’d be unable to call for help.

These principles include being considerate of other visitors and of wildlife (winter is an especially vulnerable time for wildlife), along with other important trail etiquette practices.

View all Seven Principles of Leave No Trace >>

The Cascade Day Use area, located off State Route 73 between Lower and Upper Cascade Lakes, is closed until further notice due to the icy condition of the unmaintained entry road.

There is 22 inches of snow at the stake of the showers of Lake Colden (elevation 2,750 feet) with up to 3 to 4 feet in the higher elevations. Microspikes are suitable between the trailhead and Marcy Dam. Crampons are required on high elevation, steep slopes.

Lake Colden and Avalanche Lake are crossable, but ice around the inlets and outlets of both lakes should be avoided.

Snowshoes should be carried on all hikes above 2,300 feet and used wherever snow depths exceed 8 inches.

A small section of the Whiteface Mountain Trail just above the junction with the Whiteface Highway (Wilmington Turn) has been rerouted to avoid hazard created by ice conditions and the “rock cut” of the highway.

The use of wood burning stoves is prohibited in the Eastern High Peaks. The ban of campfire applies to any type of use of wood as fuel to protect the trees and other vegetation from being damaged.

Lake Lila Road is closed to public motor vehicle access until the end of the spring mud season. Hikers, snowshoers, and cross-country skiers may use the road but are prohibited from trespassing on adjacent private lands.

An Interim Access Plan for the Boreas Ponds Tract identifies access and recreational opportunities that are available prior to the classification of the tract and development of a unit management plan.

Learn about ice fishing in the Adirondacks >>