Hiking with your love over Valentine’s Day? Maybe it’s just another weekend for you and you’re simply heading out to hike, ski, snowmobile, and enjoy the ADK. Here’s the latest on what to know:

The Weather Report: It’s Still Cold Out There

Check the forecast for your destination and plan accordingly. Weather at the summits will be more severe, with below freezing temperatures, snow, ice, and strong winds. Take the wind chill into consideration when preparing for the weather.

Approximately 2 feet and 9.5 inches of snow has accumulated at the Colden Caretaker cabin and 5 to 6  feet of snow on summits. Snowshoes are needed on all trails in the High Peaks Wilderness, starting at the parking lots. All ski trails are skiable. Avalanche Lake and Lake Colden are windblown with snow drifts.

Snow accumulation data is collected every other week and was last collected on February 3:

Recent Trail Notices to Know About

There have been several reports of unstable snowpack on open slopes. Practice safe travel when crossing exposed areas.

The Wolf Lake Landing Road in McKeever is a groomed snowmobile trail during the winter. This includes where the McKeever Trailhead Parking Area is located. Vehicles should not attempt to drive into the McKeever Trailhead, nor down the Wolf Lake Landing Road, when the road is covered with snow and/or ice. Multiple vehicles have become stuck when attempting to drive in and needed to be towed out. There is no official winter parking at this location.

The Wilmington Trail, Catamount, and Taylor Pond snowmobile gates are open with good snow coverage at this time. 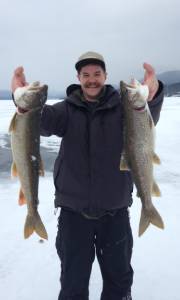 Ever been curious about ice fishing? You can try it this Saturday and Sunday without a fishing license. The recent weather has improved ice conditions across the state, so conditions are good.

A minimum of three to four inches of solid ice is the general rule for safety; know that ice thickness is not uniform on any body of water.

Check out an intro to ice fishing >>

The DEC values your feedback and consistently asks for it. Here’s one for boaters: They’re conducting a survey on the overnight gate closure program at Mossy Point and Roger’s Rock boat launches on Lake George.

The information gathered will inform a more permanent program for future boating seasons and support the state’s ongoing efforts to protect Lake George from invasive pests. The survey and comment period is open until March 12.

Leave No Trace, Winter-Style: Give Wildlife a Thumbs Up

Here’s a fun way to make sure you’re putting enough distance between you and wildlife (it can be tough when we all want to get that perfect picture!).

Leave No Trace recommends the trick of standing with your arm straight out in front of you and your thumb up. Close one eye and look down your arm at your thumb. If you can “cover” the animal from view using your thumb, you’re far enough away. If you can’t, step back until you can. Do make sure you’re not in danger before using the thumb trick.

Read about a Winter Photo Contest and more local news >>