Hunting In The Adirondacks Gets Confusing 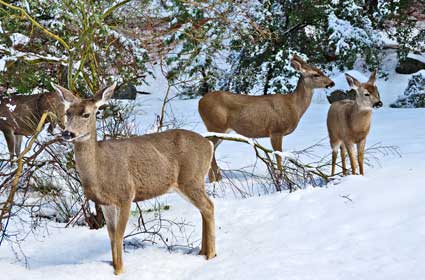 Henderson, NY - A 188 pound deer with an eight-point rack bounds out in front of you. First thought? It probably wouldn't be 'Oh, that's a doe.'

But that is what Joel Grimshaw encountered one morning this past November. Grimshaw shot the animal down from about 75 meters and realized that looks can be deceiving - that the massive deer sporting eight points was not a buck, but a doe!

Steve Heerkens, a big-game biologist, heard Grimshaw's story and claimed it "almost seemed impossible" - that does usually don't grow antlers and 188 pounds is "huge for any deer."

After being field dressed, the doe had to be hooked to a truck to be taken off of the field because it was so heavy.

Unusual occurrences of does with antlers have been documented before - there was a doe with a thirteen point rack killed in Minnesota in 2002.

But if you're out hunting in the Adirondacks this season (with a deer management permit or archery and muzzle loader privileges) - take care, because if this doe had a big sister, you could be in trouble!