Wolves have been thought to be extinct for over a hundred years in the Adirondacks and Northeast United states, until recently. Could the Adirondack timber wolf be making a comeback? Read on to find out.

The question is whether or not these wolves are wild. 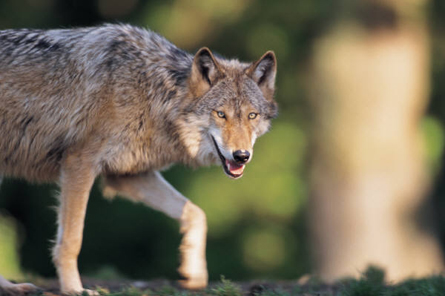 A coyote hunter killed an 83-pound male wolf just north of the Great Sacandaga Lake in 2001. The wolf responded to a deer carcass that was placed for coyote bait. There were also two wolves shot in Vermont’s Northeast Kingdom in 1998 and 2006. These two wolves probably migrated south from Quebec into the area. Five other wolves were shot in New York and New England, and the specimens were examined to determine whether they were wild, or had escaped from captivity.

The wolves went through a series of tests to determine what they had been eating, which would answer the question of where the wolves came from. Captive wolves are usually fed scrap meat that comes from domesticated farm animals that are raised on corn. Wild wolves eat herbivores that have been surviving on wild plants in the area. The chemical isotopes that are produced from wild plants in the northeast are different from the isotopes produced by corn. The diet of the wolves can be determined, which in turn shows us where they came from.

After testing, scientists found that five of the wolves had a domestic diet, and that three had been living in the wild. They don’t know for sure where the wolves are coming from, some think the upper Great Lakes region, or Ontario’s Algonquin Park. What is assumed, is that if a few wolves have migrated from the north, more will follow.

After the expiration of wolves in the northeast in the early 1900s, coyotes migrated north and began filling the niche that the wolves had vacated. There are also coyotes that are part wolf in the northeast, but these mixed breeds are significantly smaller than the native wolves.

The next question is protection. (Not for us, for the wolves!) There was talk some years ago about reintroducing wolves to the northeast, but nothing ever happened. Now that they are reintroducing themselves, should we protect the species until the numbers are up? Gray wolves are protected throughout the country, just not in the east. The Adirondack wolf is a timber wolf, but after extensive studies it has been determined that all wolves in North America are a variety of the gray wolf, and fall under the same species.

What do you think? Should we protect timber wolves and encourage their reclaiming of the Adirondacks and the northeast? This will surely affect the coyote population, and probably the density of the deer population as well as other prey.

The land belongs to the wolves just as much as it belongs to us (if not more), but I don’t think I would want to come across an 85 lb. timber wolf while hiking through the Adirondacks. Would you?

Learn more about wolves in the Adirondacks >>