People across the globe suffer from mental illnesses that many of us will never encounter or understand. These diseases are not visible, haunting and tormenting individuals on a very personal level, forcing them to battle it silently. More often that not, those suffering from depression are not given the help they need before it is too late. People are not only talking about this on a national level, now they are acting on a very LOCAL level. Two Clarkson University Alums are taking on a challenge to get us talking…a challenge you would have to see to believe.
It is solely up to us as human beings, as complex and sensitive individuals, to join together and support one another; we must take responsibility, raise awareness, and fill the holes these people have in their lives. Kolby Ziemendorf and Catherine Zarnofsky, Clarkson University Alums, are leading by example and doing just that with their intiative- “46 Climbs”. 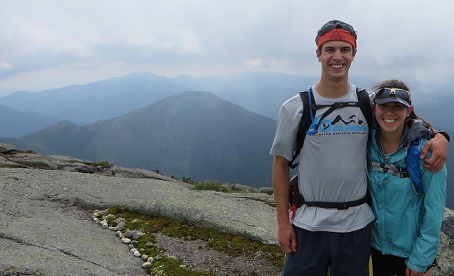 Next Monday, the two brave individuals will attempt to hike the Adirondack 46 High Peaks in one short week. The time period for their travels, ending on the 14th, is National Suicide Prevention Week! The first time these 46’ers hiked every peak, it took them about a year and a half. These two are seasoned veterans (and presidents of Clarkson University’s Outing club) so we have high hopes they will reach their goal! We sent Kolby a few questions to get all the details you might want to know! So here’s what he had to say.

Adirondack.net: If you don’t mind us asking, what inspired you to raise awareness for suicide prevention? How did you come up with the idea to tackle all 46 peaks to do so?

Kolby Ziemendorf: Almost five years ago, my high school tragically lost two great kids to suicide, one being a friend and teammate of mine. A few years later, suicide touched a family member and two other friends attempted suicide. I felt helpless as I struggled with the senseless, heartbreaking loss and prayed that some day there would be something I could do about it. Catherine and I climbed all 46 Adirondack High Peaks (mountains over 4000′) while students at Clarkson University and we had the crazy idea to combine our love for the mountains and the cause that is very near and dear to us by attempting to climb them all during National Suicide Prevention Week. Our goal is to raise $10,000 for the American Foundation for Suicide Prevention.

ADK.net: What kind of training goes into this effort and what are the odds (we are rooting for you) that it will get accomplished?

KZ: The total distance is about 189 miles. This means that we have to average about a marathon a day. Being a former member of the Clarkson University Baseball team, the longest distance I had to run was 90 ft. to first base. Fortunately Catherine was on the Clarkson University Cross Country team and has been able to act as a coach for most of the training. The training is a bit unique since we had to prepare like ultra-marathoners, but usually when someone runs an ultra it is one day and you dont have to worry about the next day. We had to incorporate the small recovery time into our training in order to properly prepare. 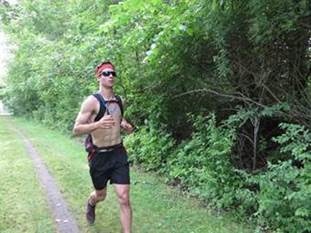 ADK.net: What will the travel be like for this? Will you camp on each mountain top? Bring food/drinks with you? Climb to the top of each?

KZ: We will be starting and ending at the trail-head every day but one. For that day, we will be camping out in the backcountry in a lean-to, in which three members of the Clarkson University Outing Club will hike in all of our gear. The plan is to only have to carry snacks and lunch with us during the event.

ADK.net: If there was one message you wanted to get across, or one thing you would want to say to accompany this HUGE feat-what would it be?

KZ: There are a lot of analogies with depression and our event. The best way to put it would be through the quote by Karen Salmansohn-“Often it’s the deepest pain which empowers you to grow into your highest self.” We want to portray that even when times are tough, the journey makes you stronger and the view from the summit is always worth it.

ADK.net: How is the money being raised? Are you sponsors donating if you complete your mission? Are you simply asking the public for donations to support your effort? How can we help?

KZ: Our goal was to raise $10,000 for the American Foundation for Suicide Prevention. The link can be found on our website to make a donation (46climbs.com). The North Face, The Mountaineer, and the Albany Fleet Feet have helped us with gear sponsorship to help us be prepared for this challenge. Another fact you may be interested in is that in the completion of this event, Catherine will be setting the women’s speed record for the 46ers (no women has attempted a speed record at this point so she will be the first). 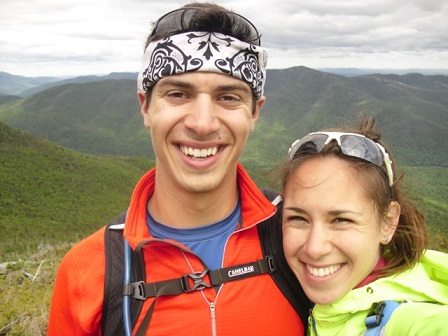 Impressed? Moved? Want to help? You can! Visit www.46climbs.com to check out a detailed game plan, schedule, and details about this fundraiser. The goal is $10,000 and so far Kolby and Catherine have surpassed it by over $1,000.00. The journey has already began- so visit their site and see their progress on the live GPS tracker! Please help honor those we have lost and fight for those who still need your support. If we start talking now, who knows how far our conversation will travel; it might start on the top of Cascade Mountain and reach the Rockies before we know it. For more information on events in the Adirondacks or to start taking on the 46 peaks visit Adirondack.net!