Your Guide to the Adirondack Region
Enter Giveaways Advertise
Home  »  Attractions  »  A Railroad Here to Stay, With YOUR Help!

Model train lovers, fear not! Railroads on Parade is here to stay… with a little help! The intricate model train display has avoided its anticipated dismantlement and will continue to be a main attraction in northern Warren County – but they need your help to stay afloat! 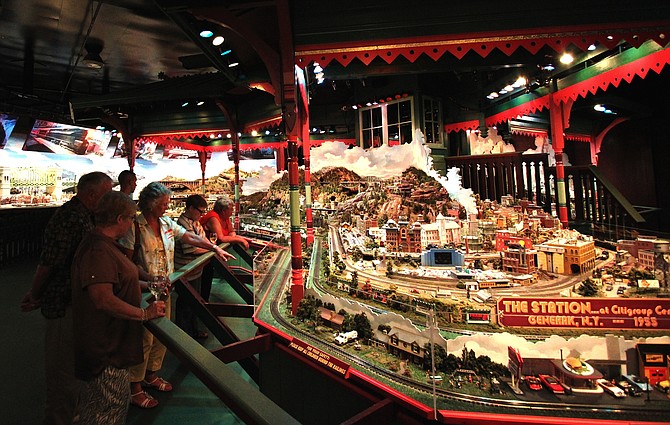 Railroads on Parade, featuring six miniature worlds on model trains, has been an important attraction in Warren County – providing a world of magic and wonder for all ages. The world-class exhibit is held in a 5,000 square foot indoor exhibit space including four season displays: The Station, the Hell Gate Bridge, NYC Subways, The Prince Edward Island RR, and the 1939-40 World’s Fair. This must-see even includes over 50 trains and trolleys, animations, day-night lighting, animations, backdrops, scenery, and graphics to really amplify the experience.

Located in Pottersville, the display has avoided dismantlement after it was anticipated in a forced public auction. The online auction of the display was held on November 11, 2014 between the displays creator Clarke Dunham and two other investors. A new agreement was negotiated – the Dunhams could keep the displays intact and Railroads on Parade would continue to operate.However, the negotiation was for $75,000 and the Dunhams have only raised $35,000 to date.

Needless to say, there was relief, but at the same time worry. While Clark no longer had to walk away from his life’s work, he still is working towards raising enough funds to keep his work alive. The Dunhams don’t know what the museum’s future holds – will it become a nonprofit organization, or will it be wholly owned by new investors?

Either way, the Dunhams are not giving up! The museum has already set up an account at Glens Falls National Bank to hold all donations received toward the purchase price. The funds will be returned if the museum opts to remain privately owned. Interested in making a donation? Donations can be sent via checks payable to Railroads on Parade 2015 at P.O. Box 117, Pottersville, NY 12860. Every little bit counts, so consider making a donation to keep this magical location alive!

Looking for more? Read more about Railroads on Parade avoiding dismantlement in Adirondack Journal >>
If and when you decide to make the trip to Pottersville to see the Railroads for yourself, let us know! Share your experiences with us!