Your Guide to the Adirondack Region
Enter Giveaways Advertise
Home  »  Fun stuff  »  The Adirondacks 100,000 Years Ago

Earlier this month, a North Country Public Radio listener asked what the Adirondacks would’ve looked like prior to the last Ice Age. The question sparked an intriguing discussion between Martha Foley and Dr. Curt Stager that’s worth sharing! 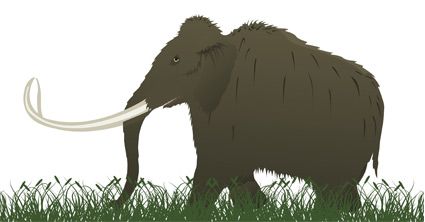 We have to travel back 100,000 years to evaluate the listener’s question, which may seem like an incredibly long time, but actually isn’t that long ago, geologically speaking.

According to Dr. Stager, the bedrock and mountains would’ve been much the same as they are today, as would big bodies of water, like Lake George. Any features, like smaller lakes, that were shaped by glaciers wouldn’t have been present before the last Ice Age.

Dr. Stager also said that previous studies of the iron mine at Tahawus and a pit that was formerly near Cayuga Lake revealed more clues about the landscape at that time. “The forest was a little bit different,” he said. “It was more like the Blue Ridge farther south, so there was pollen from a lot of oak trees, hickory trees, black gum and things like that that you expect to find in a warmer climate farther south.”

As for animals, it would’ve been common to find mammoth (pictured above), ground sloths, cave lions, short-faced bears, dire wolves, and multiple varieties of fish. The one animal you wouldn’t find: humans.

What do you think about the way things were back then? It seems like surprisingly little has changed in 100,000 years!