When you go trout fishing in the Adirondacks, you’re generally after one of four types of fish: Brook Trout, Lake Trout, Rainbow Trout, or Brown Trout.

You might already be aware that two of these fish are not native to the area, and were introduced by outsiders for sport. What if I told you that no trout is native to the Adirondacks? 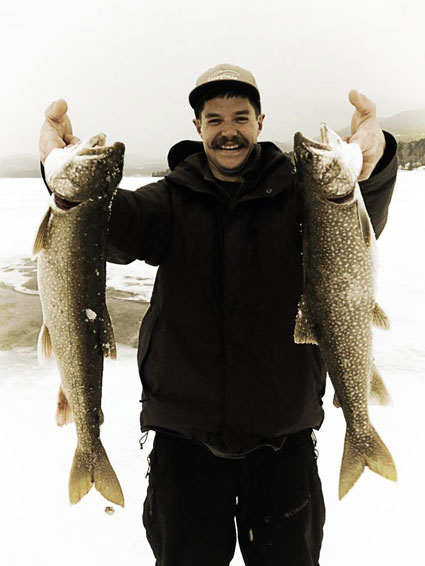 Rainbow Trout were introduced to the area from the western part of the country. Rainbows are fun to catch, they put up a great fight and are known for jumping out of the water to try to break free. It’s all very exciting. That would explain why someone thought it would be a good idea to bring them to the Adirondacks for sport.

Brown Trout were introduced to the area from across the pond. In my experience, Brown Trout are the most elusive and difficult of the family to catch. This may be one of the reasons that they were brought over from Europe — for the challenge. (I should note that I don’t have a particularly easy time of catching any type of trout.)

The DEC now stocks Rainbow and Brook Trout all over the state of New York.

Brook Trout and Lake Trout are native to the Adirondacks.. however, they aren’t technically trout. These two species of fish are relatives of the Char. The Arctic Char has been around for thousands of years,and are technically more closely related to Brookies and Lakers than any type of “real trout”.

Brook Trout can be found in lakes and ponds, but they thrive in cold running water from the mountains. Lake Trout will almost never be found in a stream, and usually lurk around the deepest, coldest portion of a lake.

Rainbows and Browns are real trout, which are more closely related to Salmon than they are to Char. These fish thrive in lakes, rivers, streams, ponds.. they are pretty versatile.

Landlocked Salmon were also introduced by outsiders, and are technically much closer to a Brown Trout or a Rainbow Trout than they are to a Brookie or a Laker, even though they often behave like Brook Trout and Lake Trout, thriving in cold water and deep lakes.

So, technically, there are no native trout in the Adirondacks. Although that’s not going to stop me from fishing for all of the above mentioned species!

What is your favorite type of “trout” to fish for?