Your Guide to the Adirondack Region
Enter Giveaways Advertise
Home  »  Community  »  If You See A Newborn Fawn, Look, But Don’t Touch

The white-tailed deer is one of the most elusive yet common game animals in the Adirondacks. However, aside from hunting season, the other time of the year when deer are threatened by humans is during the summer – right after the fawns are born. 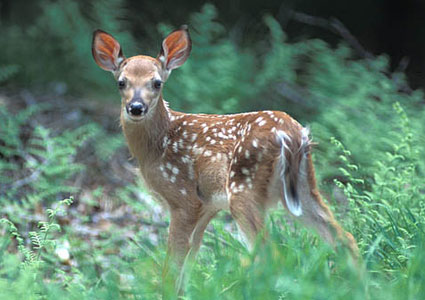 Photo Credit: Gerry Lemmo
In the Adirondacks, white-tailed deer breed between late autumn and early winter. Younger females commonly bear just one fawn, while older females are known to bear two fawns. The gestation period lasts for about 200 days, so most fawns are born in late May or early June.

Newborn fawns weigh an average of four pounds, and white spots cover their reddish brown fur. During the first week, fawns barely move around except to nurse. Fawns start to follow the mother after about a month and begin to consume vegetation. Weaning, which is when the fawn stops relying on its mother’s milk, can take up to 4 – 6 months.

During these few months after their birth, fawns are naturally at risk of predators, such as coyotes, but humans also play a role in their young lives. The most common occurrence is when someone sees a fawn alone and believes it has been abandoned or needs help. It’s important to note that even if you don’t see the mother, she knows where her fawn is.

In this situation, people tend to get too close or even pick up a fawn. This is harmful because deer won’t feed or take care of their fawns when people are near them. Additionally, if humans are around them too much, then young deer might not be as afraid later in life, which would impact their survival instinct.

So what can you do to help protect these newborn fawns? One course of action is to make sure your pets are leashed, fenced in, or in an area where you don’t see fawns or adult deer nearby. However, the best thing you can do is to leave the fawns alone because their best chance of living is out in their natural habitat.

Have you seen any fawns yet this season?