BestColleges.com is recognized as one of the nation’s best sources for college planning, and the website recently named its picks for New York’s top colleges in 2016. In its list of the Best Four-Year Colleges, St. Lawrence University was included in the Top 10! 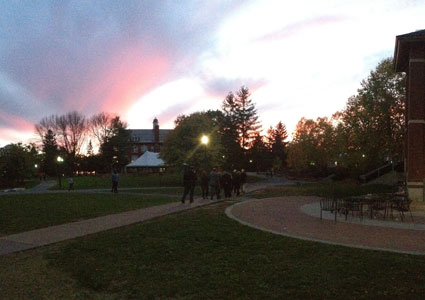 Photo Credit: Emma Morrissey
Compared to the other four-year colleges in New York State, St. Lawrence University was ranked the 10th best, which is a great accomplishment for the small, liberal arts college.

Here is the full list of the Top 10 Best Four-Year Colleges in New York, as ranked by BestColleges.com:

Along with the Four-Year Colleges, BestColleges.com also ranked the Best Two-Year Colleges and the Best Online Colleges in New York. All three lists took into consideration the cost of tuition, enrollment, graduation rates, jobs, and other data collected from the National Center for Education Statistics (NCES). In total, 25 colleges were selected and ranked in each of the three categories.

To provide prospective students guidance, the three lists also include up-to-date information about each college. Three of the most relevant topics – educational initiatives, enrollment statistics, and tuition rates – are focused on, along with others.

BestColleges.com mentioned in its guide for four-year colleges that the average New York State resident pays over $20,000 in tuition each year. However, New York’s Tuition Assistance Program does help those who require financial aid. Plus, according to the U.S Bureau of Labor statistics, degree-holding graduates have had better success in getting hired within the state recently.

All things considered, St. Lawrence University’s Top 10 ranking is a testament to the small school as being one of the best in New York State.