Editor’s Note (10/17/2018): Please be aware that the Big Moose Tract Conservation Easement that leads to the Stillwater Fire Tower will be closed to the public from October 9th through December 20th, 2018. The New York State Department of Environmental Conservation asks that people respect the trail closure signage and not trespass on the lands or climb the fire tower. The Big Moose Tract lands will be patrolled during this time.

A crew of over 100 dedicated volunteers restored a historic fire tower in the western Adirondacks over a period spanning several years. Designated an Adirondack Historical site, the tower’s grand reopening was celebrated in early July and you can take the one-mile hike to check out the amazing views for yourself! 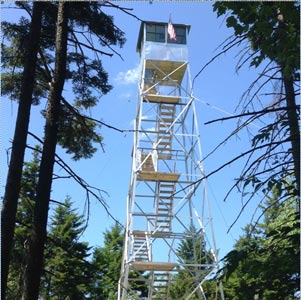 Photo provided
Friends of the Stillwater Fire Tower is the hardworking nonprofit organization behind the project. The group is made up of Stillwater locals as well as volunteers from all over the state, surrounding states, and even from Florida! The New York State Department of Environmental Conservation jumped in on the project to assist with purchasing materials and getting them up the mountain.

In addition to restoring the fire tower, originally built in 1912 and replaced in 1919, the volunteers also cleared the one-mile trail to the tower. Thanks to their dedication, hikers are now able to visit this iconic piece of history for a chance to see picturesque views of the High Peaks, Tug Hill, and Five Ponds Wilderness.

The tower is located on the summit of Stillwater Mountain at an elevation of 2,264 feet. To find it, put “Big Moose Road, Webb, NY” in your GPS. It’s only a one-mile hike up to the fire tower, with an easy ascent of 560 feet. The tower will be open through the rest of the summer and early fall – it will be closed October 11th through December 20th for hunting season (the tower is located on leased hunting club property).

The Stillwater Fire Tower is one of 34 fire towers still standing in the Adirondacks, from an original 57 that were built within the Blue Line. Two “great fires” in 1903 and 1908 destroyed almost 1 million acres of Adirondack forest, prompting officials to come up with a new plan for fire prevention. Fire towers and observation stations were subsequently constructed on the tops of mountains to allow observers to pinpoint where fires were occurring, a practice eventually replaced by aircraft, beginning in the 1970s.

Learn more about the history of fire towers in the Adirondacks >>

Take on the Fire Tower Challenge! >>