During the chillier months of the year, a local brewpub can be a great place to escape the cold and spend time with friends and members of the community. Tupper Lake’s own Big Tupper Brewing is set to reopen its brewpub on Wednesday, December 7th, and offer an updated menu and more! 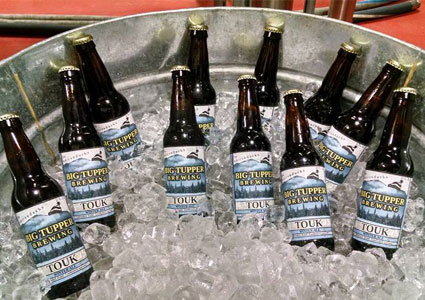 Photo provided
The menu is currently being finalized, but the new focus will be traditional pub fare. David Tomberlin, owner of Well Dressed Foods, has helped to change up the menu and create signature barbecue sauces, ketchup, onion soup, burgers from locally sourced beef, and some surprises, such as a peanut butter and jelly mac and cheese.

Despite this completely revamped menu, Big Tupper Brewing’s beers will still be the main feature at the brewpub. The plan is to fill up all 14 taps with the company’s brews, such as its Touk Winter Ale.

In addition to these upgrades, the brewery also hopes to offer homemade ice cream in the future, as well as release a new pale ale next year.

In July 2016, Big Tupper Brewing opened a Mexican restaurant in its brewpub named LaLa’s. The restaurant was operated by Tupper Lake native Janelle LaVigne, but it only remained open until October 2016.

Once a mutual decision was made to close the restaurant, Big Tupper Brewing determined it was time to upgrade and transform the brewpub. Since then, the owners have been working hard to completely rework the menu and create a welcoming atmosphere.

The brewpub expects the liquor authority will give a conditional approval this week. When it reopens on December 7th, its winter hours will be 11:30am-10:00pm Wednesday through Saturday, and then it will be open seven days a week during the summer season.

Stop by and check out all of the exciting changes at Big Tupper Brewing!