It’s been a while since we’ve heard any major updates about New York State’s $32 million revitalization project at the former Frontier Town in North Hudson. Recently, however, the NY State Department of Environmental Conservation (DEC) announced their proposal for a Frontier Town Campground, Equestrian & Day Use Area, which would be a significant part of the planned recreation hub. 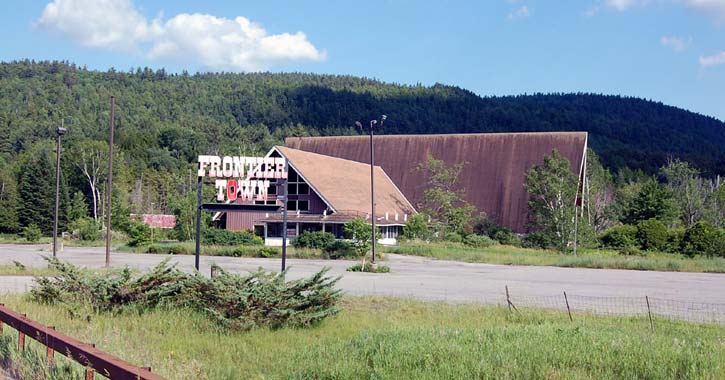 For over four decades, Frontier Town was a wild west-themed attraction that helped transform the North Hudson region at Exit 29 into a tourist destination. Unfortunately, as years passed and the popularity of the park decreased, Frontier Town eventually shut down and the surrounding communities faced economic struggles as a result.

To help bring new life back to the heart of the Adirondacks, Gov. Cuomo announced in this 2017 State of the State agenda that New York State intends to transform the abandoned theme park into the Upper Hudson Recreation Hub, nicknamed the Gateway to the Adirondacks.

Moving Forward With The Master Plan

Soon after the initial announcement, New York State released their Master Plan for the Upper Hudson Recreation Hub, which outlined key components of the $32 million revitalization. Some of the highlights included a new campground and day use area, a welcome center, restaurants and lodging near the hub, and more.

In addition, many of the structures at the former Frontier Town would remain standing in order to preserve the spirit of the theme park’s history in the region.

Funding for these year-round facilities is expected to come from a combination of state and private investments. Paradox Brewery is one business that will be investing in the recreation hub, as they intend to expand to the site.

In a recent press release from the DEC, they announced their official plans for a new Frontier Town Campground, Equestrian & Day Use Area at the Upper Hudson Recreation Hub.

According to the DEC, this accessible, public campground will “link local and regional outdoor recreation experiences in the Adirondack Park” and encourage people to visit the area.

Not only that, but there will also be a year-round parking area, a day use area with separate parking near the Schroon Lake shoreline, and an entrance ticket booth.

A $13 million state investment through the NY Works program will help fund the project, pending approval from the Adirondack Park Agency (APA). The APA has deemed the DEC’s permit application complete, and they are currently reviewing the project proposal as a whole.

If the project is approved, the DEC will begin work at the site in February 2018. Then, if everything goes according to plan, the day use area will open in Fall 2018, followed by the campground in Summer 2019.

Are you excited about the development of this Gateway to the Adirondacks?

Learn more about camping in the Adirondacks >>