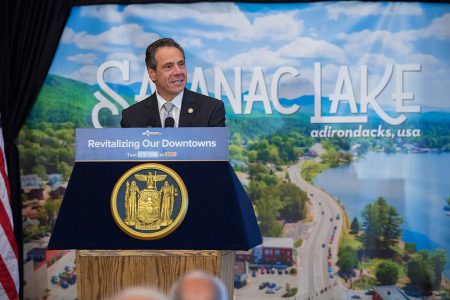 Saranac Lake was chosen as the North Country winner in the third round of the Downtown Revitalization Initiative, which will target all 10 New York State regions. The aim of this state-wide funding initiative is to rebuild and expand downtowns for greater residential and business growth.

“Saranac Lake’s unique downtown neighborhood and year-round appeal made it an ideal candidate for the third round of Downtown Revitalization Initiative funding,” Governor Andrew Cuomo said in a news release. “Following the re-opening of the landmark Hotel Saranac, we are building on this momentum and helping downtown Saranac Lake reach its full potential, attracting both residents and visitors for generations to come.”

This is the latest cash infusion for the Adirondack village, which has already received $45 million in public and private funds invested in downtown improvement projects over the past 10 years. The goals include projects that increase Saranac Lake’s quality of life and year-round public amenities, as well as the development of market-rate housing and rehabilitation of existing housing.

Housing and facilities are essential in the ongoing effort to attract working professionals and families to Saranac Lake, Cuomo said.

Plenty of places to stay and lots of stuff to do in Saranac Lake!>>>