It may be almost spring, but you wouldn’t know it in the Adirondacks! Conditions are great this weekend for snowshoeing, skiing, and snowmobiling. However, avalanche conditions may also exist, particularly in the High Peaks region, so read up on avalanche awareness and safety before heading out this weekend. 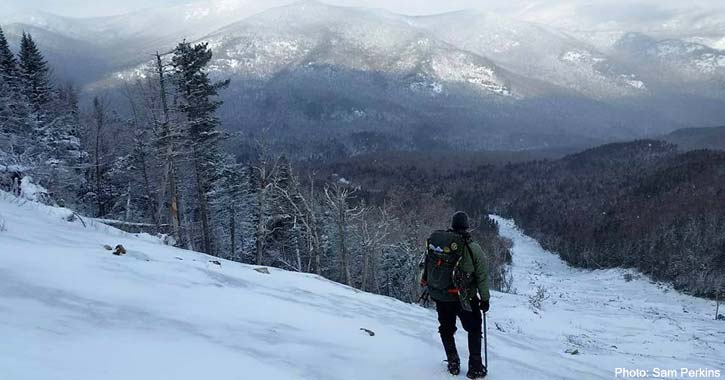 Remember that weather forecasts can and do change suddenly. Check the weather report again right before you head out.

Always keep in mind weather conditions will be more extreme at summits than what you’ll find at the trailheads.

There is currently 15 to 30 inches of snow on the ground with much deeper snow in the higher elevations. Below freezing temperatures are forecasted throughout the weekend, with nighttime lows going into the low teens and single digits.

Continue to dress properly for winter conditions. Stay dry and add or remove layers to regulate your body temperature. Carry plenty of food and water, and eat, drink, and rest often. Being dehydrated, hungry, or tired makes you more susceptible to hypothermia.

Remember that traveling through snow takes more energy and time than traveling on the same trails in the summer.

Avalanche conditions may exist on slides and other exposed slopes after significant snowfalls. Learn more about how to recognize avalanche conditions, avoid triggering an avalanche, and the necessary rescue equipment you should be carrying with you if you’re going backcountry skiing in the Adirondacks.

Dig test pits and know how to read the snowpack. Don’t rely on someone else’s assessment. Carry avalanche beacon, probe, and shovel, and know how to self rescue. Practice safe travel techniques and when in doubt, don’t go.

Please report any observed avalanche activity to the DEC Dispatch at 518.897.1300.

Hikers should be aware of spruce traps this weekend. After a large accumulation of fresh snow, spruce traps can occur. A spruce trap is when deep snow hides a cavity between buried branches. This happens more often at higher elevations where the trees grow shorter but the snow piles higher.

A misstep off the broken trail, even in snowshoes, could mean finding yourself waist deep in a trap. When breaking trail, be cautious of buried branches and take your time to find the safest path. Educate yourself on spruce traps before embarking on your hike.

Trails are covered with snow and snow depths do warrant the use of snowshoes. Snowshoers and skiers should stay on designated trails to avoid avalanche prone terrain. Secondary trails may contain deep, untrammeled snow. “Breaking trail” takes a lot of time and energy.

Use caution when hiking above tree line as trail markers (stone cairns) are covered by snow, and blowing snow will shorten sight distance and cover tracks.

Thick ice is present on high elevation trails, especially on bedrock summits, steep rocky slopes, and other exposed areas. The thick ice might be covered by snow. Carry mountaineering or climbing crampons if you’re planning to travel up trails to mountain summits and use when warranted; trail crampons will be ineffective here.

Deep snows are providing great late season snowmobiling opportunities. Many gates and snowmobile trail systems previously closed have been reopened with the recent storms. Check local conditions before going out.

Ice on Rivers and Streams

Large areas of ice moving have gone or thinned considerably. All the ice is covered in snow. Ice that holds the weight of snow might not hold the weight of a person, snowmobile, or ATV.

Be sure you know the thickness of the ice under the snow. If you don’t know, don’t go over it.

Use extreme caution at all stream crossings as rocks are covered with ice.

Ice on Lakes and Ponds

Ice has thinned on lakes and ponds, especially over river channels and other moving water. Water and slush are present below the snow on the surface of the ice.

The DEC has received and responded to many reports of motorized vehicles falling through the ice. Again, if you’re unsure, don’t go on the ice.

Avoid and stay well away from ice that is over running water, near inlets and outlets, and near boathouses and docks.

While the days are getting longer, the DEC is still recommending to carry a headlamp or flashlight on all hikes. Be sure to have fresh batteries and carry extras with you. Don’t ever depend on your cell phone as a flashlight because it drains the batteries, which would render you unable to call for help.

All areas right now have deep snow and snowshoes or skies are required.

The High Peaks region has received 18 inches of new snowfall in the 24 hours prior to Wednesday afternoon and additional snow has accumulated since then. Snowshoers and skiers should stay on designated trails to avoid avalanche prone terrain.

There is 57 inches of snow at the shores of Lake Colden with up to 5 to 6 feet of snow in the higher elevations. Avoid the inlets and outlets of Lake Colden and Avalanche Lake, as snow is covering thin ice around the open water.

The private landowner of the Kushaqua Conservation Easement Tract is conducting a timber harvest in the area of the Loon Lake Mountain Trail. Be prepared to encounter logging trucks and heavy equipment at any time on the trail and the easement lands in the area during this time. Please contact the DEC Ray Brook Office at 518.897.1291 if you have any questions about the harvest operation.

Due to logging operations on the CL West Tract, the DEC has closed the Cranberry Lake 50 connector trail and Lost Pond Trail to the public until further notice. The Cranberry Lake 50 trail has been temporarily rerouted to its former route State 3 during the closure.