Two weeks ago, I wrote about seven boat inspection sites that had been selected for the Adirondack-wide Aquatic Invasive Species Spread Prevention Pilot Program. Recently, The North Country Gazette confirmed a total of 11 decontamination stations and 14 new steward locations that will be part of the effort to keep invasive species out of Adirondack waterways. 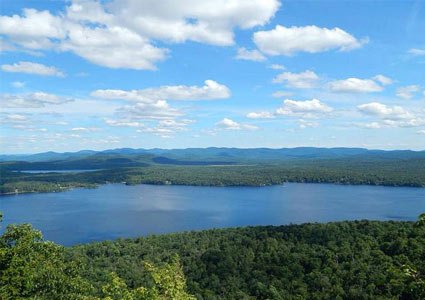 View of Piseco and Spy Lake from Panther Mountain – Photo Credit: Kristina Miller LaBarge
Stewards trained by Paul Smith’s College will be in place to offer decontamination tips and assistance for boaters. This past weekend, stewards were deployed at the following locations where they will be for the remainder of the summer, according to The North Country Gazette:

The Clifton/Fine station has already been opened, and the rest will be following in June. Although boaters are not required to use the station or steward services this summer, it is strongly recommended that they do so. If the program is a success this year, it could become mandatory in subsequent years.