Over in the Town of Warrensburg lies one of the first districts listed in the National Register of Historic Places. Known as the Warrenburg Mills Historic District, it encompasses the buildings and sites from the Woolen Mill Bridge to the Osborne Bridge. Within this district, there is one building in particular that has quite a storied history – The Birdhouse. What was once a simple granary is now the headquarters of the Lotus Group of Companies, which operates eight diverse businesses in Upstate New York. 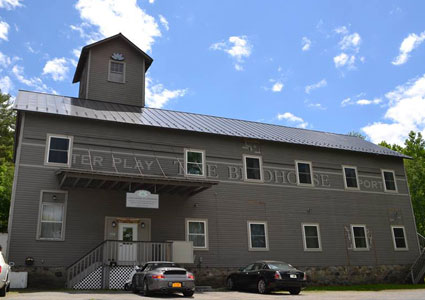 Photo Courtesy of the Lotus Group
Located at 101 River Street, directly across the road from the well-known Grist Mill Restaurant, The Birdhouse has been a part of Warrenburg’s Historic District since the 1800s. The feed storage and granary was owned by B.P. Burhans & Son, and in 1886, it was purchased by Thomas Smith of Horicon. The building changed hands multiple times in the following years, as did the nearby grist mill, hardware store, and other River Street buildings.

In 1986, the granary was purchased by Brad Jamison, owner of Enter Play Sports. He transformed the building into a production center and play area named The Birdhouse. Jamison’s renovations preserved the building’s old woodwork but opened up space on the first floor to create an indoor court for a sport he invented – Birdball.

Birdball is best described as a combination of hacky sack and badminton. The Birdball projectile is an oversized badminton birdie with a large foam head and netting made of woven fabric. Each player stands within a circle and hits the Birdball back and forth using both hands and feet. Basically, you get 2 points if the Birdball lands in the opponent’s circle, but if you hit it out of bounds, the opponent gets 1 point.

Jamison manufactured Birdballs in the building and welcomed potential players to participate in games for many years. However, by 2016, The Birdhouse and its accompanying properties on River Street were sold to the Lotus Group. The company’s own construction team made further renovations to The Birdhouse, and at the end of May 2016, Lotus Group moved its headquarters from Mountain Avenue to 101 River Street.

Although The Birdhouse retains much of its historic framework and name on the outside, it is now much more than a small town granary. Lotus Group Founder and CEO Ash Anand told us he hopes to give the building, “new life under the banner of The Lotus District.” The company owns buildings on 95-106 River Street, including the Grist Mill, Bark Avenue Dog Grooming, and Lotus Auto Xperts, and has made a point to restore, not tear down, old places.

“I love this community and with the history behind Warrensburg, we have seen that in periods where there has been no substantial change, the society has stood still,” Anand told us. “Progress occurs when someone shows a little courage, care, and willingness to seize the opportunity to change things for the better…,” and for Anand, that was why he chose The Birdhouse as the company’s new headquarters.

According to Lotus Group Marketing Coordinator Maggie Morgan, the renovated Birdhouse is old but new. The largest addition is the office space on the second floor, and Morgan’s office is actually a former bedroom. The most prominent feature of The Birdhouse, the fourth floor lookout tower, is still intact and accessible for those brave enough to climb the ladder.

For Lotus Group, the restoration of The Birdhouse is connected to what the company is all about. The image of a lone lotus flower emerging from a murky pond inspired Anand to choose the plant as his company’s logo. In Warrensburg’s Historic District, he has shined a light upon the old Birdhouse and made it a key part of his new Lotus District.