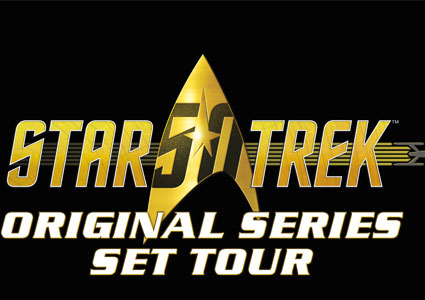 The Star Trek set replicas were designed by super-fan James Cawley. Back in 1997, Cawley received a copy of the blueprints from Star Trek: The Original Series costume designer William Ware Theiss. Since then, he has researched and meticulously crafted replicas of the sets. He studied stills and frame captures from the series, as well as examined antiques and materials, in order to make his sets as accurate as possible.

For Cawley, this endeavor was a way for him to show his love for the popular sci-fi series. In a press release, Cawley said, “To me there is no other franchise around that is more enjoyable and more socially relevant than Star Trek.”

To celebrate Star Trek’s 50th anniversary, Cawley will finally open up his Starship Enterprise sets to the public. Under license by CBS Consumer Products, the detailed sets will be presented as they were on the “Desilu” (now Paramount Pictures) Stage 9 in Hollywood for the original series. The exciting tour will transport visitors back to 1966 and bring them down memory lane.

The one-of-a-kind experience will be offered starting July 30 at 112 Montcalm Street in Ticonderoga. The tour will be a highlight of sci-fi convention Trekonderoga when it arrives this August.

“I’m very thankful for all the support I’ve received on this project and can’t wait to begin welcoming my fellow fans this summer,” Cawley said in a press release.