The little brown bat is one of four species of mouse-eared bats in the Adirondack Park, and it is also the most common one in the region. Found throughout a large portion of North America, little brown bats live in buildings/houses and hollow trees in summer and then hibernate in caves and mines in winter. Although they are viewed by some as a nuisance species, they are in fact fairly harmless and beneficial to the local environment. 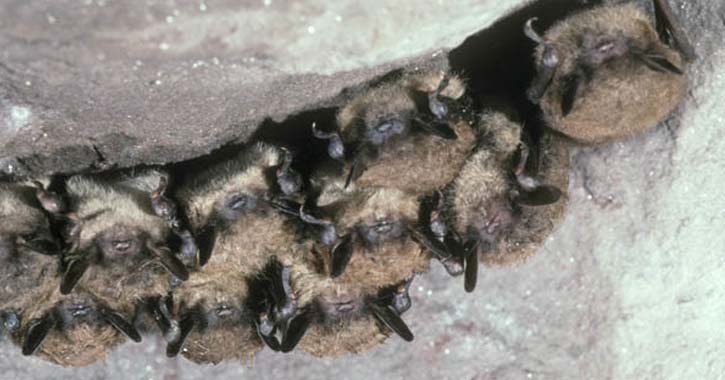 Little brown bats are small, nocturnal mammals that have the ability to fly. The average bat has a wingspan of 8-9 inches, a body length of 3-4.5 inches, and a 1.5-inch forearm. Adults typically weigh .3-.4 ounces, and females are a little heavier than males.

These bats are covered in dark brown hair that has a glossy golden appearance. Their black, hand-like wings allow them to fly at speeds of 4-21 mph. Bats are active at night, and they use echolocation (rapid pulses of sound that bounce off of objects) to detect prey and their surroundings.

Bats are an important part of the environment because they eat hundreds of flying insects every day. During the night, they use echolocation to detect and capture insects while in mid-flight. Little brown bats are able to net insects with their tail membrane and transfer them to their mouth.

Their erratic movements are night at due to their tendency to attack swarms of bugs and dart after them. Thanks to their rapid chewing and digestion, they are able to consume over 1,000 insects per feeding period (1-5 hours).

Bats As A Nuisance Species

While it's true that bats can carry and transmit rabies, they are not very dangerous animals. However, one of the reasons they have been labeled a nuisance species is because they may infest a house/building during the day. When they aren't hunting at night, bats seek the shelter of warm, dry places, such as an attic, cracks in your home, or even under floorboards.

If you hear scratching, squeaking, or find droppings that smell like ammonia, then you may have a little brown bat infestation. Rather than try to harm the bat, the NY State Department of Environmental Conservation suggests these two approaches:

Perhaps the greatest threat to populations of little brown bats and other bat species is white-nose syndrome. This is a deadly disease that is believed to be caused by a fungus that grows in cold environments. When bats hibernate in winter, the white fungus can grow on their nose and wings. This causes the bats to become more susceptible to disturbances during hibernation, which can lead to depleted energy levels and death.

Want more wildlife? Learn about fishers in the Adirondacks »