For the first time in years, most Adirondack lakes, ponds and streams will be fish-able in early April. April 1st is like Christmas for anglers, the opening day of trout season across New York State!

The mild winter we had in the Adirondacks this year will make a big difference in the area fisheries. Lakes and ponds had far less ice this year due to warm spells, and much less snow fell than in years past. This will result in early ice-out on lakes and ponds, and below average flows in streams and rivers, as snow melt and runoff will be quite a bit lower than usual. You might be able to access your favorite fishing spots right away this year.

Last year, we were fishing Lake George until the end of March, through 12+ inches of ice. This year, the ice fishing window was much shorter (about six weeks), and the ice has been out for weeks already. Less pressure on the fish all winter means more hungry fish left in the lake for spring! Most lakes in the Adirondacks were held to a shorter ice fishing season this year, and likely haven’t had any ice for at least a week.

I don’t remember a year when ponds were opened up and streams were flowing low enough to wade for opening day of trout season. This should be fun! 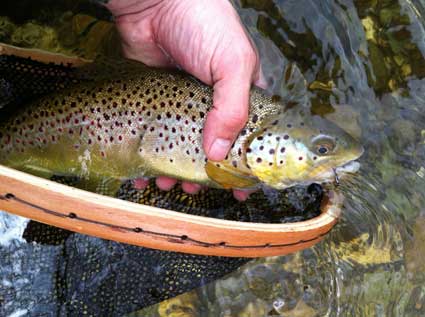