Although there’s no rain predicted for this weekend many trails are wet and muddy from recent showers. See what else you need to know for hiking in the Adirondacks this weekend with the weather report, trail notices, and more. 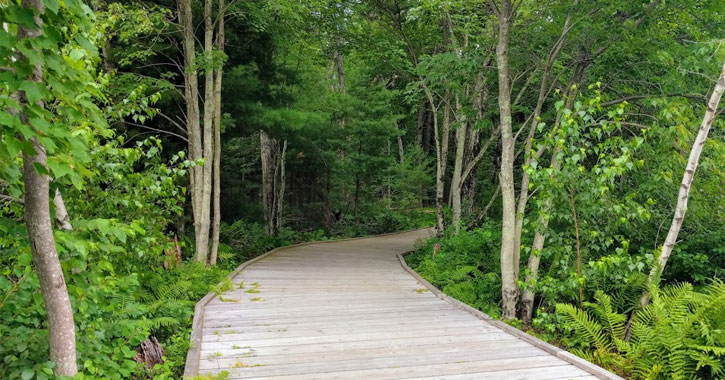 Mud and water can be found on the trails thanks to recent rains, especially in low spots and along waterways. Remember to walk through the mud and water, not around it, to protect trailside vegetation.

High bear activity has been reported in the Eastern High Peaks, Dix Mountain Wilderness, and Giant Mountain. Bears have been approaching campers and climbers in the Chapel Pond area. Abide by the following to prevent a negative encounter with a bear:

Know what to do in a bear encounter >>

Fire danger is currently low in most of the Adirondacks, but moderate in the eastern portion. Practice campfire safety – never leave campfires unattended and make sure fires, coals, embers, and ashes are cool.

Read up on campfire safety >>

Although there is no rain forecasted this weekend temperatures are lower than last weekend. Temperatures will be even cooler with winds stronger on the high elevation summits.

Mosquitoes, deer flies, and biting midges are present throughout the Adirondacks. Follow these steps to keep insects away from you as best as possible:

Know out how to deal with black flies >>

Seasonal access roads consist of dirt, sand, gravel, and/or stone and tend to have a rougher surface than typical roads. If you’re using these roads in the Adirondacks you’ll need a four-wheel drive truck, an SUV, or another high clearance vehicle that’s recommended for use on seasonal access roads.

All rock climbing routes are open except for on Sleeping Beauty Mountain to allow peregrine falcons to nest.

Avalanche Lake Trail is still closed, but will reopen on Saturday after the DEC and Student Conservation Association Adirondack Programs replace the “Hitch-up Matildas” – the bridging on the cliff face along the lake.

A crew of Student Conservation Backcountry Stewards and the DEC High Peaks Trail Crew will begin dismantling Marcy Dam on Monday the 28th. The work is going to continue into mid-September. This is the third year of a five year project to dismantle the dam in a way that minimizes the movement of sediments into Marcy Brook. The public is asked to stay out of the designated work areas and to not disturb equipment whether crews are working there or not.

The Lake Arnold/Feldspar Brook Trail is wet and muddy but passable.

The top landing on the Mt. Adams Fire Tower has been repaired. The fire tower, including the cab, are open to public use.

The trail across private lands to the summit of Owls Head is closed to public access and use on the weekends.

The first and second foot bridges on the Bradley Pond Trail are damaged and unusable. The stream can be forded/rock hopped on the downstream side of the bridge sites.

The high water bridge over Slide Mountain Brook on the Phelps Trail between the Garden Trailhead Parking Area and Johns Brook Lodge is broken and unstable.

The Blueberry Horse Trail between the Calkins Creek Horse Trail and Ward Brook Horse Trail in the western High Peaks contains extensive blowdown, is grown in with vegetation, and is also poorly marked. The trail is impassable to horses, making it impossible to complete the Cold River Horse Trail Loop.

Read about the history of Adirondack trains >>