Your Guide to the Adirondack Region
Enter Giveaways Advertise
Home  »  Camping  »  Weather, Trail Conditions & Notices to Know About for Hiking in the Adirondacks: Nov 10 – 12

We are looking at wintery conditions in the Adirondacks this weekend. Some damage can be found on a couple of the trails thanks to recent blowdown from heavy winds, and there are other notices you’ll want to check out before your weekend hiking trip. 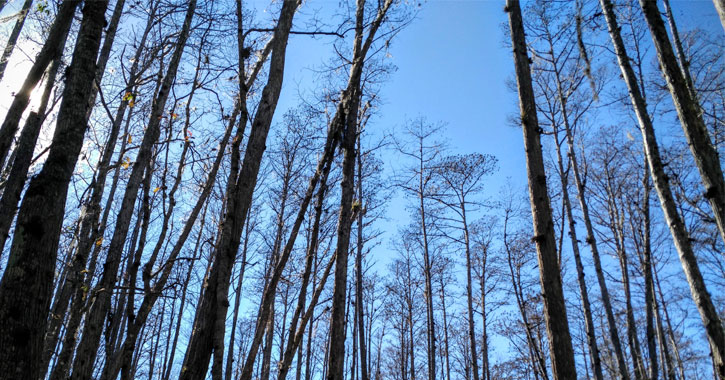 The weather is significantly colder than last week, although it’s looking like a dry weekend with no rain forecasted.

According to the DEC, temperatures will be below freezing in most areas throughout the weekend, except in lower elevations where temperatures may get above freezing on Sunday afternoon. There may be snow on the ground.

Dress appropriately for the weather with layers of noncotton clothing, gloves, a hat, and bring a headlamp or flashlight on all hikes. Bring extra batteries for the flashlight and never rely on your cell phone as a flashlight.

Weather conditions can change quickly and you should always carry extra clothing, equipment, and supplies in case of an unanticipated overnight stay.

Temperatures will of course be colder and winds stronger at the summits. Wear a jacket or coat that blocks the wind when on summits or other exposed areas.

Trails are currently a mixture of mud, water, snow, and ice. Wet or icy leaves can be very slippery; use caution when walking on leaves, particularly on steep sections of trail. Wear proper footwear, including traction devices.

Due to recent high winds, you can expect to encounter blowdown (fallen or hanging trees, limbs, and branches).

Remember to walk through the mud and water and not around it to protect trailside vegetation.

The regular big game hunting season is currently open. Many small game and waterfowl hunting seasons are open or will be open soon. Hikers should remain aware that they may encounter hunters bearing firearms or archery equipment while out on the trails.

Please remember these are fellow outdoor recreationists who have a legal right to participate in these activities. Hiking accidents involving non-hunters are extremely rare.

A large tree has fallen on the lean-to on the Mr. Van Ski Trail causing severe damage. The lean-to is now unsafe and unusable. The DEC is working with partners to evaluate the extent of the damage and the requirements and timing of repairs.

Several sections of the Phelps Trail contain extensive amount of blowdown. Please use caution when hiking around this area. The high water bridge over Slide Mountain Brook between the Garden Trailhead Parking Area and Johns Brook Lodge on this has been replaced by the Adirondack Mountain Club Trail Crew.

The trail across private lands to the summit of Owls Head is closed to public access on the weekends. It is available for public use during the week. Please stay on the trail and avoid trespassing on private lands.

The trail through the Elk Lake Easement lands connecting to the High Peaks Wilderness is closed to the public through the regular big game hunting season. It will reopen on Monday, December 4th.