Although there is no serious snowfall forecasted for this weekend in the Adirondacks, snow and ice is present, especially at the higher elevations. Dress appropriately, bring extra supplies, and brush on up on the hiking notices and you’ll have a safe and fun time hiking. 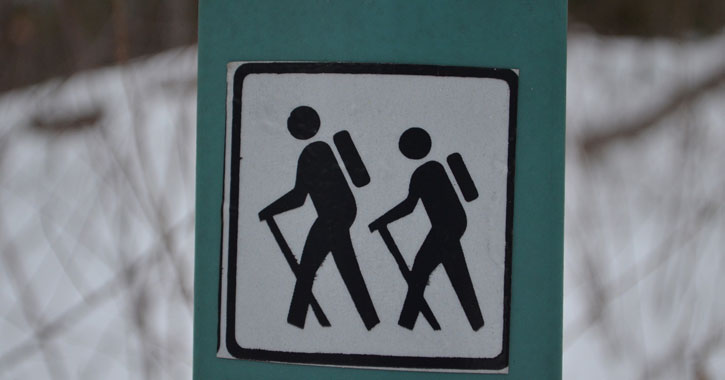 Always keep in mind that weather conditions can and do change quickly. Check the weather again immediately before heading out, and prepare to spend an unanticipated night in the woods. Carry extra clothing, equipment, and supplies.

Below freezing temperatures, snow, and ice are present at all elevations. The snow cover is light and patchy. No significant snowfall is forecasted for this weekend.

Avoid hypothermia by staying warm and dry. Wear a waterproof outer layer, layers of noncotton clothing, and a hat and gloves or mittens.

You’ll especially want to be dressed warmly for the summits, where the winds will be stronger, and snow and ice will definitely be present.

It might be easy to forget that the days are getting shorter and it will be getting dark early. Bring a flashlight or headlamp for all hikes. Make sure you have fresh batteries and bring extras. Don’t rely on your cell phone as a flashlight, because it will drain the battery quickly and then you’d be unable to call for help.

Expect to encounter a variety of snow, ice, mud, water, and wet leaves on the trails. The lower elevation trials will be icy in the morning but will thaw by midday; ice will be present all day in the higher elevations.

Wet, icy, and snow-covered leaves can be slippery – use caution, especially on steep sections of trails.

Wear proper footwear, including traction devices, particularly on steep sections of trails and at water crossings where rocks may be covered with a layer of ice.

Ice is beginning to form on many waters. High elevation ponds may be iced over. However, ice will not bear the weight of a person at this time. Just because the ice can hold snow doesn’t mean it can hold a person.

Keep in mind that you may meet hunters bearing firearms or archery equipment while hiking on the trails. Remember these are fellow outdoor recreationists, who have the legal right to participate in these activities. Hunting incidents involving nonhunters are extremely rare.

The trail through the Elk Lake Easement lands is closed to the public through the regular big game hunting season – this will add four miles to a roundtrip hike, so plan accordingly. The trail will reopen on Monday, December 4th. The Clear Pond Gate on Elk Lake Road will remain closed through the spring mud season.

A large tree has fallen on the lean-to on the Mr. Van Ski Trail causing severe damage. The lean-to is now unsafe and unusable. The DEC is working with partners to evaluate the extent of the damage and the requirements and timing of repairs.

Several sections of the Phelps Trail contain extensive amount of blowdown. Please use caution when hiking around this area. The high water bridge over Slide Mountain Brook between the Garden Trailhead Parking Area and Johns Brook Lodge on this has been replaced by the Adirondack Mountain Club Trail Crew.

The trail across private lands to the summit of Owls Head is closed to public access on the weekends. It is available for public use during the week. Please stay on the trail and avoid trespassing on private lands.

Check out info on winter camping in the Adirondacks >>