Conditions are looking pretty decent for recreating in the Adirondacks over the three day weekend. Deep snow is present on virtually all hiking trails and snowmobile trails are open. Be sure to take a moment to review current trail conditions, the weather report, and additional information before you embark on your outing. 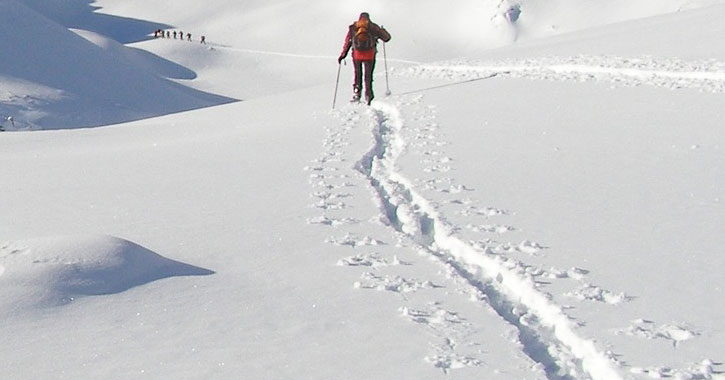 Presidents Day is Monday, making for a three day weekend for some. Therefore, you can expect to encounter more vehicles at trailheads and more people and snowmobiles out in the Adirondacks.

Make sure to park in designated parking areas at trailheads – do not block gates, entrances, exits, or other vehicles. When parking your vehicle, be considerate and do not take up more spaces than necessary. Trailheads and parking areas are expected to be full during the holiday weekend.

Practice trail etiquette. Be courteous of others while out on the trails, regardless of their activity, speed, or skill level. Hike in single file, especially when approaching other hikers. Stay to the right and pass on the left when safe and appropriate. Allow faster hikers to pass. When approaching other hikers from behind, politely alert them to your presence and desire to pass.

Below freezing temperatures, snow, and ice are present throughout the Adirondacks. Snow depths range from 8 to 30 inches. Shallower snows are found in the northwestern and very eastern portions of the Adirondacks.

Unexpected weather is likely at high elevations. Be prepared to encounter high winds at summits and on exposed trails. Bring extra layers and be prepared to turn around if the weather becomes too dangerous.

Preparing for the Weather

As usual for winter hiking in the Adirondacks, you should be wearing a waterproof upper and lower outer shell, waterproof footwear, layers of synthetic or wool winter clothing (not cotton), and a hat and gloves or mittens.

In addition, this weekend is forecasted to be partly sunny, so keep sun protection in mind. Always wear sunscreen or UV protected clothing when out recreating. Even in the cold, the sun still emits dangerous UV rays. Sunglasses are also essential for eye protection, even in the winter. The sunlight intensity is increased from reflecting off the bright white snow. Polarized lenses with UV protection are best when recreating on a sunny winter day.

Also, remember that the days are still fairly short – bring a flashlight or headlamp with you and extra batteries. Never rely on your cell phone as a flashlight as it drains the batteries, preventing you from being able to call for help.

Trails are currently covered in 15 to 20 inches of snow. They might have ice on the surface of the snow due to recent and forecasted warm weather and rain. Thick ice is present on bedrock summits, steep rocky slopes, and other exposed areas. Warmer temperatures and rain are expected to bring icier conditions to the lower elevations.

Snowshoes or skis should be worn on all trails. Trail crampons and other traction devices should be carried and used when warranted on low elevation and less steep trails.

Carry mountaineering or climbing crampons during outings on steep slopes in the high elevations and use when needed.

Conditions will be more extreme at the summits than at the trailhead. You can expect colder temperatures, lower wind chill temperatures, stronger winds, deeper snow, and thicker ice.

Ice has formed and thickened on most water bodies. Ice on rivers and streams is less thick.

Always check the thickness of ice before traveling across it. Avoid ice over running water, near inlets and outlets, and near boathouses and docks, especially those with bubblers or other ice prevention devices.

Snowmobile trail systems throughout the Adirondacks are open. Check local conditions before heading out.

There is 34 inches of snow on the shores of Lake Colden (elevation 2,750 feet) with up to 5 to 6 feet of snow in the higher elevations. Remember that snowshoes or skis are required wherever snow depths exceed 8 inches, which is basically on all trails. There will likely be ice on top of the snow.

Lake Colden and Avalanche Lake are crossable, but ice around the inlets and outlets of both lakes should be avoided.

Find out about ice climbing in the Adirondacks >>