Although spring is here, the snow continues to fall! You’ll still need to dress warmly and bring adequate supplies for hiking in the Adirondacks. The water levels have risen, ice on water bodies is no longer safe for crossing, and more – see what you need to know before heading out this weekend. 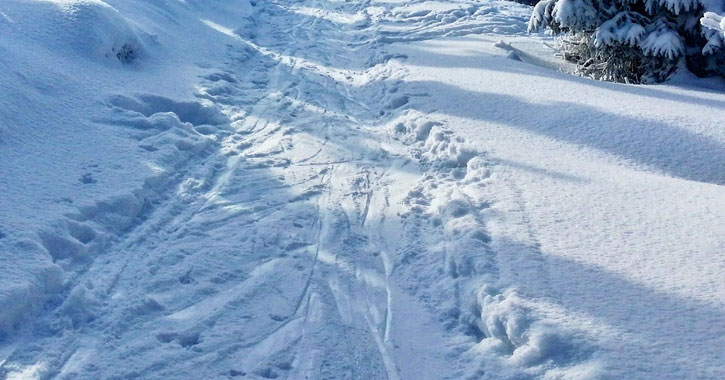 Expect to encounter below freezing temperatures throughout the Adirondacks in the evening, overnight, and in the morning. Higher elevations and exposed summits may have significantly colder temperatures.

Snow and ice are present throughout most of the Adirondacks. Recent above freezing temperatures, rain, and wind have combined with longer, sunny days to reduce the snowpack significantly. Snow depths range from 0 to 10 inches in the lower elevations to several feet above 4,000 feet.

The Adirondacks experienced heavy winds Wednesday afternoon through Thursday which resulted in a significant amount of blowdown (fallen trees, limbs, and branches). Plan for all hikes to take longer than usual and be prepared to turn back if the blowndown is extensive.

Compacted snow on trails has turned into ice. This creates “monorails” as trailside snow melts. Trails with no snow or “monorails” may still be icy from recent rains.

Use trail crampons (microspikes) on all trails and walk on, not around, monorails to avoid post-holing in trailside snow, trampling vegetation, and eroding trails.

Heavier crampons for climbing or mountaineering should still be used on the higher elevation slopes and summits.

Melting snow and recent rain have raised water levels. Rivers and streams are flowing high and fast. Stream crossings may be dangerous or impossible.

The water temperatures are very cold. People immersed in the water may lose the ability to think clearly and move quickly after only a short time in the water.

No ice is considered safe at this time.

A number of rock climbing cliffs and routes in the Eastern Adirondacks are closed to climbers to allow peregrine falcons to mate and select nesting sites. Once the nest sites are identified the DEC will reopen routes that will not interfere with nesting activities.

Rock climbers are encouraged to be cautious and observant while climbing in other locations and report any aggressive or agitated peregrine falcon behavior to the DEC Wildlife at 518.897.1291 or info.R5@dec.ny.gov.

All snowmobile trails and gates on seasonal access roads are closed in Black River Wild Forest. Mill Brook Road and Wolf Lake Landing Road gates will open for public motor vehicle traffic when the roads have dried and hardened, and all needed repairs and maintenance are completed.

The Erie Canal Bridge over Otter Creek in Independence River Wild Forest has been damaged and is closed indefinitely.

The gates have been closed at each end of the Moose River Plains Wild Forest for mud season. The road will reopen when it has dried and hardened, and all needed repairs and maintenance are completed.

Be aware of ice falling from cliffs above Avalanche Pass.

Corey’s Road in the Western High Peaks is closed beyond the Calkins Brook/Raquette River Trailhead Parking. It will remain closed through mud season and will reopen when it has dried and hardened, and all maintenance and repairs have been completed.

The aforementioned peregrine falcon mating and nesting activity is taking place in the Giant Mountain Wilderness. Rock climbing routes are closed on Upper and Lower Washbowl Cliffs in the Chapel Pond area at this time.

Get details on spring hiking in the Adirondacks >>