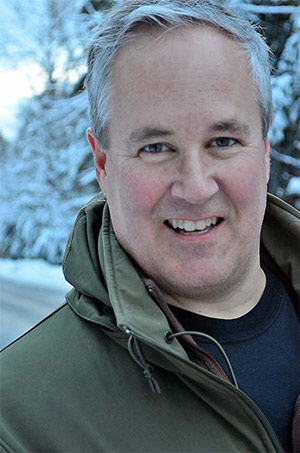 John Conroe is the Amazon.com best-selling author of the urban fantasy series The Demon Accords. An Upstate NY native, Conroe has published 15 novels and 2 compendiums for his army of devoted readers. His most recent novel, Zone War, is Conroe’s first foray into the science fiction genre.

We sat down with Conroe to learn more about his new book, writing process, and love for the Adirondacks.

Q: Thank you for joining us, John. Let’s start with your long-running series The Demon Accords. What’s it about?

John Conroe: Sure. The Demon Accords is an urban fantasy, which means it involves supernatural elements in the contemporary world living side by side. The series begins with a young police officer named Chris Gordon who is working out of New York City—he’s just out of his probationary period and he’s moved to the city from upstate New York. So he’s kind of a fish out of water in that regard. His main element is that he is a demon hunter that has been sort of tapped by God to represent Heaven on Earth. Although he’s not truly aware of that at this point, he just has this innate ability to exorcise demons wherever he is and he’s drawn to them. And in the process of following a demon in a night club in New York City, he discovers that there’s a lot more than just demonic activity in the supernatural world so he comes face to face with vampires, eventually werewolves, and begins to broaden his exposure to what’s going on.

JC: If you go three hours north of Saratoga Springs you’re in St. Lawrence County, right on the border in the western-top part of the state and that’s where he comes from.

Q: And that’s where you come from as well, correct?

JC: Yeah it is. So I wrote what I knew. I grew up in St. Lawrence County where the main character comes from and I spent a lot of my youth in the Adirondacks doing an awful lot of outdoor activities. And now I have a residence in the Adirondacks in a different part, and I’m moving into that. Every time I drive through the Adirondacks, ideas pop into my head. My imagination never really stops operating which worries my wife to a degree. But, the Adirondacks is such a rich environment for its history and to sort of create those dark places in our mind of what’s possible and could this happen, what’s out there? So I do touch base with the Adirondacks quite a bit. I put a couple stories in the compendiums about the things that have happened in the Adirondacks and places that I know. I’ve renamed them.

Q: So, did you get the inspiration for your main characters from people you know then? Chris Gordon, Tatiana… are they based on anyone?

JC: Most of my characters are blends of people. For instance, Chris’s family was butchered by demons when he was eight. He was raised by his paternal grandfather, Gramps. Gramps is an amalgam of a bunch of different people I know, maybe three. And then the rest of my characters all have traces of different people in them. They say that every single character that a writer creates has a little bit of that writer in them and I’d say that’s true, but I’d also say that they certainly have a lot more characteristics than anything I bring to it. So, it’s different people I’ve met and I tend to take things and blend them together.

Q: Chris has a great sense of humor. Where does that come from?

JC: The sense of humor? Mine is probably worse than his so he’s got a good sense of humor. Definitely there’s people in my family, my daughters have very witty senses of humor and that translates into many of the characters, a side character, Lydia who is very quick witted and snarky and she comes from a lot of the ladies I know in my life who are all strong.

Q: That’s funny. So how many books have you written so far?

JC: I have written fourteen novels in The Demon Accords series with two smaller compendiums and then I’ve written another book, Zone War, that’s the first of its own series and it’s a sci-fi series. It does not have any of the elements of supernatural or that urban fantasy part.

Q: Tell us a little more about this new book, Zone War.

JC: Zone War is near-term sci-fi. It has some elements of that post-apocalyptic type of thing, but instead of taking out the entire world, I’ve just taken out Manhattan. It was something I wanted to try. I read a lot of different genres, so I like to experiment in all those different genres and there’s nobody to sort of reign me in so I can do what I want. In this case I wanted to explore the kind of things we read about in the news about autonomous drones coming down the line or killer war machines. What happened if somebody released a whole group of those into an urban area like Manhattan and what would that look like if it was able to be contained and then ten years later, how would that affect things? And that’s sort of where that came from.

Q: How would you describe your reader?

JC: I would say men are the core of my audience and that’s anyone from late teens up into their sixties. I think a lot of fiction that’s out there now is written by a lot of female writers. There are probably more female authors than there are male authors and the biggest genre is romance by far. And in the urban fantasy area there’s a paranormal romance grouping and that takes up an awful lot of the book titles that are out there, so I wanted to write something that was geared toward men, where yes we might like to have the romantic interest in there, but really we want to move the story along and not dwell on that and have more action and maybe a faster pace to the story line.

JC: Actually, I don’t usually intend it to, but I do read it and I do read the reviews that people write on Amazon and all the other places. Some of it I ignore. I can see what they’re saying, but I will tend to say yeah, but this is my world and I want to write it the way I want to write it. But then there are a lot of good ideas that people come up with and what will really get my attention with is when they talk about side characters that they want to know more about. That leads me to want to put those people into a story line and tell you more about them.

Q: What is your methodology for researching the locations and information in your books?

JC: When I have something that I don’t know, I try to find people who are experts in the field that can give me advice on it. If it’s a specific location, I make sure that I make time to visit and walk through and study a couple different areas where I came up with scenes to occur. I make sure that I actually visit them, walk them in person and gather in the atmosphere and the details. A lot of my books have violent content, gun fights, things like that. A lot of that information is stuff I already know.

Q: Wait a second, you’ve been a banker all your life… How do you know about gunfights?!

JC: [laughs] I’ll say that I don’t know anything about actual gunfights. But, I know a lot about firearms and I’ve dabbled in martial arts my entire life. That part of it has always been a fascination for me. I’ve been to some training academies where you’re taught by ex-police officers and ex-military personnel for personal defense with a firearm. So you get a lot of insight from them and it’s very similar to what the police go through.

Q: What advice do you have for struggling writers?

JC: You need to write every day. If you’re not inspired it doesn’t matter. You need to write anyway. So, even the days when your personal muse isn’t generating a whole lot of word count, getting something down is important. It all adds up. It’s a bit-by-bit type of accumulation. It usually takes me, at the current pace I’m writing, close to six months to get a book out. I think that’ll speed up when I leave my full time job but you just have to make sure you’re doing some every single day.

Q: That’s great advice. When’s your next book going to be out?

JC: I’m trying to crunch one out in January sometime. So, January 2019 or possibly February depending on how much I get done and how fast I get it done.

Interested in learning more about John Conroe’s The Demon Accords or Zone War series? Visit his website at www.johnconroe.com to learn where his books are sold, connect with other fans of his work, and read never-before-seen exclusive content!