Green Island on Lake George at Bolton Landing has been home to a trio of renowned resort hotels, the third of which is still in use today. 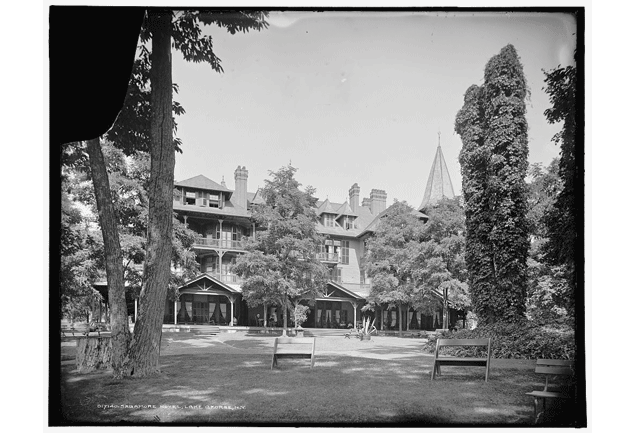 The first Sagamore Hotel was designed by Wilson Brothers & Company and built in the Queen Anne style. It featured an expansive floor plan and complex architectural elements, including a great number of balconies, porches, dormers, and verandas. The hotel prided itself on offering the best in modern technology and amenities, and featured lavish guest rooms and a level of intimacy that stood in opposition to its towering size.

The Sagamore was built with the intention of finding harmony with nature, and its setting amongst a grove of trees with spectacular views of the mountains and the lake accomplished what it was meant to.

As the Sagamore Hotel was exploding in popularity, it met its untimely end. The hotel was completely destroyed by a fire that broke out in the laundry room in June 1893. Everyone escaped safely, and the hotel's directors vowed to rebuild as quickly as possible.

The second Sagamore was constructed on the original stone foundations of the building's predecessor, and many of the first hotel's features were reflected in the second. The same firm of Wilson Brothers & Company designed the new version, and they stuck to the exact timetable the directors requested.

The larger reincarnation opened in July 1894, and was extremely well-received by the public. It boasted more modern electric amenities, and even had its own power plant on the grounds. New recreational opportunities were afforded by horse stables, tennis courts, and bowling alleys.

Owners re-planted trees and flowers to replace those that had been lost in the fire. They also added more sophisticated furnishings and decorations to give the hotel's interior a rich feel.

The second Sagamore was once again at a peak in its popularity when it, too, burned down unexpectedly in April 1914.

Disagreement among the directing company's stockholders led the next reconstruction to be delayed for a few years. Eventually, the company reorganized and a new group of investors announced its new plans for the third Sagamore. In 1921-22, the building was finally completed, and was called the Sagamore Club Hotel.

This new hotel was built in the Colonial Revival style, and, like the others, was well-received by the public. In 1929, the modest Sagamore Club Hotel was enlarged to reflect the grandeur of the hotels that once stood on the property. At that time, "Club Hotel" was dropped from its name.

A number of renovations and smaller additions have taken place over the years, but The Sagamore is fully functioning on Green Island today. In fact, it is the sole surviving Adirondack resort hotel that is still operating in the hospitality industry.