Beyond the breathtaking vistas and exhilarating mountain air, the Adirondacks hold the key to a world of historical wonder. Around each corner visitors can discover hallowed battle grounds that witnessed fearless acts of heroism, explore museums that belie their rustic surroundings with impressive displays of Adirondack architecture, medicine and industry, escape to historic mansions and indulge in the comforts of elegant Victorian living.

Dating back to the 1700's the Adirondacks were a popular destination, with Lake George and Lake Champlain providing ideal conditions for settlements, and later for military posts. Opportunities abound to see examples of the evolution of Adirondack architecture, of both the real McCoy and reproduction varieties.

The last 250 years in the Adirondacks have produced a bounty of historic intrigue. Like the infinite hikes within the Park, the history here is accessible - walk the trails, ride the trains, and visit the places written about in textbooks and novels alike. 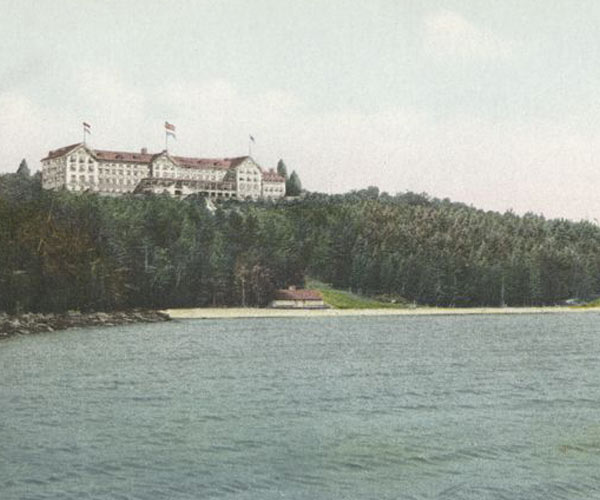 Adirondack Resort Hotels
After the Civil War, Americans had more wealth and economic power than ever before, and they began to seek seculded destinations where they could relax and escape.
Adirondack Fire Towers
After great fires charred almost 1 million acres of Adirondack forest, fire towers were built on mountain summits to help observers pinpoint fires in the distance.
The Adirondack Chair
Perhaps the most iconic piece of furniture in the region, the Adirondack Chair actually begins with the Westport Chair, created by Thomas Lee.
Roosevelt's Midnight Ride
Few people know that Theodore Roosevelt's presidency began with a midnight ride from the Adirondacks to Buffalo after President McKinley's death.
The Adirondak Loj
The Adirondak Loj is located in the High Peaks Wilderness Area and features guest rooms, a dining room and kitchen, an Adirondack library, and more.
Camp Santanoni
Camp Santanoni, one of the most distinguished of the Adirondack Great Camps, is located in Newcomb and is a popular site for visitors to explore.
Read About the Great Camps
The new and revised edition of The Great Camps of the Adirondacks book dives into the positive impact of historic preservation.
The Lady In The Lake
In 1933, Lake Placid became the setting of a very compelling mystery that still remains unsolved today: the death of Mabel Smith Douglass.
The Murder at Big Moose Lake
One of the region's most shocking and scandalous murders happened at Big Moose Lake in the Adirondacks.
The Garrow Manhunt
In 1973, a 12-day manhunt took place for serial killer Robert Garrow who alluded authorities in the Adirondacks.
Tahawus
Located in the northern portion of Newcomb in the Adirondacks is Tahawus, which has fallen into a ghost town.
Henry Diamond
Henry Diamond helped renew the focus on the environment in the Adirondacks, and shaped the modern day DEC.
The Black River Dam War
A series of battles in the 1940s, known as The Black River Dam War, threatened the Adirondack Park's wildlife and waterways.
The Battle of the Boquet River
A little-known battle between a British flotilla and local militia took place in the Town of Willsboro during the War of 1812.
The Battle of Plattsburgh
In 1814 during the War of 1812, the U.S. successfully defeated an invading British force at the Battle of Plattsburgh.
North Creek Ski Bowl
The historic North Creek Ski Bowl opened in 1934, and is still part of the area's year-round recreation scene today.
Gore Mountain
Gore Mountain opened in North Creek, NY, in 1964, and since then, it has transformed from a winter destination to a year-round attraction.
North Creek
Since its early years as a small logging community, North Creek has grown into one of the Adirondacks' premier four-season destinations.
Timbuctoo
In order to help would-be African American voters secure their suffrage rights, Gerrit Smith devised a unique scheme.
Trapping & Trappers
Trapping dates back to our prehistoric ancestors, but grew very popular in the Adirondacks during the 16th century.
The French & Indian War
The Adirondack Region was the setting for key battles of Fort Ticonderoga and Fort William Henry during the French & Indian War.
The American Revolution
The Adirondacks were the site of America's first victory at Fort Ticonderoga and the turning point of the Revolutionary War.
The Adirondack Northway
The Adirondack Northway - the stretch of I-87 between Albany and the Canadian border - was constructed in the 1950s and 60s to simplify travel in the region.
Trains in the Adirondacks
The construction of trains allowed for tourists to travel to the Adirondacks, including in the winter on the "snow trains".
Taking The Cure
In the late 1800's, the region was seen as a healing destination for those afflicted with maladies like tuberculosis.
Forever Wild
In 1892, New York State designated the Adirondack Park as "Forever Wild" proving its commitment to the region and its wildlife.
Upcoming Historic Events
Mark your calendar for upcoming historic events in the Adirondacks, including re-enactments and historic walking tours.

The Front Line in the Blue Line

The French and Indian War, also called the Seven Years' War, raged from the late 1750's into the early 1760's. This war was the single largest pre-Civil War land battle in American history. Fort Carillon, later called Fort Ticonderoga, the setting of this legendary battle, offers historical reenactments depicting with expert accuracy every detail of the battle, from uniforms and weapons to staging and military strategy.

In addition to Fort Ticonderoga, the Lake George Battlefield Park and Fort George State Park are great places for a walk, as these legendary locations have interpretive signage chronicling events like bloody battles and the race to cure smallpox that transpired on these grounds.

In September of 2005, Lake George commemorated the 250th anniversary of the Battle of Lake George in 1765, an inconclusive battle that inspired early versions of the song "Yankee Doodle."

2007 celebrated the 250th anniversary of the 1767 surrender of Fort William Henry in Lake George and the resulting massacre that occurred when the British surrendered, but were attacked further by French and Indian forces.

February of 2013 marked the 250th anniversary of the signing of the Treaty of Paris in 1763, which effectively ended the Seven Years' War, but forever changed the economic, political, and governmental relationships between America and the three European powers colonizing the newly discovered territory.