Originally introduced to the United States as an ornamental garden plant, Giant hogweed (Heracleum mantegazzianum) has been federally classified as a noxious weed. It is an invasive species that has spread throughout many states in the Eastern and Northwestern United States, including New York, threatening native species, causing soil erosion and posing a threat to humans with phototoxins in its sap. Giant Hogweed thrives in moist soil, so roadside ditches, riverside banks, open fields and forest edges would be preferred habitats in the Adirondacks as it tries to spread into the region. 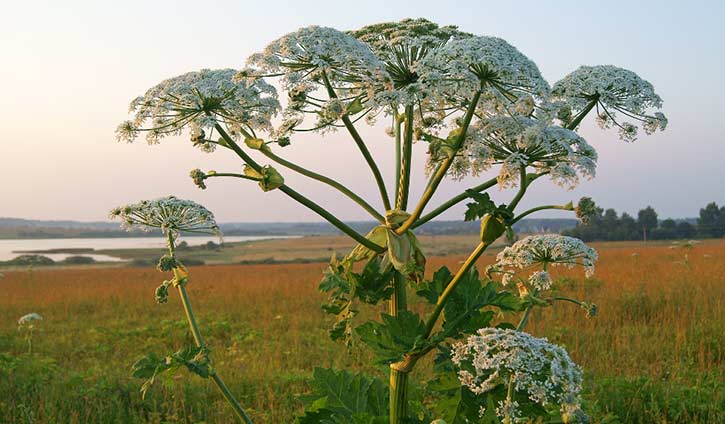 Identifying Giant Hogweed should be relatively easy, given its enormous size and distinctive flowers, but there are also Giant Hogweed look-alikes, including Purple-Stemmed Angelica, Cow Parsnip and Queen Anne's Lace (all are part of the carrot family).

Photochemicals in the sap produced by the Giant Hogweed invasive plant species are extremely dangerous to humans. It contains the same chemical compounds as the Wild Parsnip invasive plant, but in much higher volumes due to the overwhelming size of the plant. Skin that comes into contact with the sap becomes extremely sensitive to sunlight, resulting in burns that cause severe, painful blisters and scarring. Sap in the eyes can cause blindness. Contact with the bristles on the stem or broken leaves and plant parts exposes you to the dangerous Giant Hogweed sap.

Giant Hogweed is an invasive species, originating in Central Eurasia and not native to the Adirondacks or other areas where it has spread. It threatens native species and depletes the soil.

How To Avoid It?

Giant Hogweed is NOT widespread in the Adirondacks, and due to its massive size, fully grown plants are easy to spot and avoid. In the spring, however, new plants may have recently sprouted, making it more difficult to identify. The best way to avoid coming into contact with this dangerous plant is to stay on clearly marked trails when hiking or biking in the Adirondacks and wear protective footwear and clothing where your body may come into contact with unknown plants. Also be on alert for potential matches according to the identification factors listed above, remembering it's better safe than sorry.

Do NOT touch this dangerous plant! Do not attempt to cut, destroy or remove it. If you see one, report the location to local authorities so a professional can come remove the invasive plant and its seeds to prevent future spread. To report: Maintain a careful distance, take photos of the plant's stem, leaves, seeds and flowers for positive identification, estimate the number of plants, record the location and call the Giant Hogweed Hotline for further instruction: 1-845-256-3111.

What If I Touched It?

If you think you may have accidentally touched Giant Hogweed, WASH the area thoroughly with soap and water as soon as possible after exposure to the sap's harmful phototoxin, and AVOID ALL SUNLIGHT for 48 hours to lessen the severity of the reaction. FLUSH eyes with water and avoid sunlight if you think you may have gotten Giant Hogweed sap in your eye. It is wise to seek medical attention if you have had exposure to this harmful plant.