The hemlock woolly adelgid (HWA) is an invasive species from East Asia that was first found in New York State in 1985. Since then, hemlock woolly adelgids have caused widespread hemlock tree mortality in the Catskill and Appalachian mountains, and have been found in small numbers in the Adirondack Mountains. Already infesting 25 of New York's counties, the invasive insect has the potential to wreak havoc on the eastern hemlocks of the Adirondack Park. 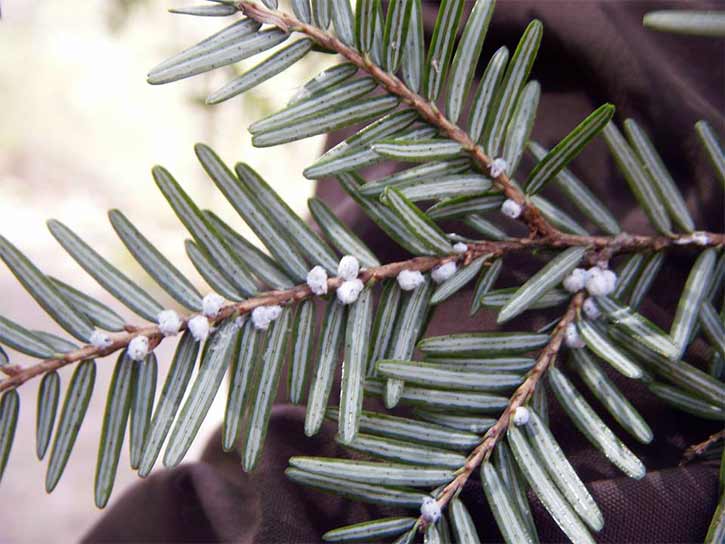 The hemlock woolly adelgid is a small, aphid-like insect that measures 1/16 inch long and ranges from dark reddish-brown to purplish-black in color. The insects are most conspicuous when they are adults and lay eggs, since they cover themselves and their eggs in a white wool-like substance for protection. These small white "wool" ovisacs are visible from late fall to the early summer, and give the insect part of its name.

HWAs are unique in that they are dormant during the summer months, during which the young adelgids (nymphs) have only a tiny halo of white woolly wax surrounding them. All HWAs are female and reproduce asexually, meaning that all adelgids can be identified from their wool-like coverings.

The insects feed on eastern and Carolina hemlock, the former of which is found throughout the Adirondacks. HWA attach their small wool sacks to the underside of the outermost branch tips of the hemlock trees.

Hemlock woolly adelgids feed on the stored starches on hemlock trees, which are needed for the tree's growth and long-term survival. Hemlock decline and mortality typically occurs within 4 to 10 years following the initial infestation. Dispersal of HWAs usually occurs when the insects are in their "crawler" stage, and the movement is typically due to the wind or by passing wildlife that come in contact with the ovisacs and crawlers. Long distance transference of the insects is mostly the result of humans unwittingly transporting infested nursery stock.

Eastern hemlock trees comprise approximately 10% of the trees in the Adirondack Park, and are vital to controlling the rate of erosion, as well as maintaining water quality and water temperature in Adirondack rivers. Hemlocks are able to thrive on steep slopes and stream banks, where other trees are unable to succeed. HWAs have already caused mass hemlock death in the eastern United States, and such decline and death of the Adirondack hemlocks would have long-term negative effects on the park's ecosystem.

Unlike other types of invasive species, HWA cannot be effectively controlled by cutting down the infested hemlock trees. Insecticides applied at the base of the trees have thus far proven to be the best; once applied, the insecticide spreads throughout the trees tissue, is ingested by the insects, and kills the HWAs. However, in forests where a large number of trees are infected, insecticides are not feasible. Additionally, the insecticides may only provide a short-term fix, and subsequent insecticide applications may be required.

Biological controls that utilize the HWA's natural predators are being investigated in the United States, although this approach comes with its own set of issues. Most of these predators must be imported from China, Japan, and Western North America and then established in the infested area.

Following the discovery of a minor infestation on Prospect Mountain, New York's Department of Conservation (DEC) is on high alert for the presence of HWA and asks for the help of hikers, campers, and anyone else outside in checking hemlock trees for signs of the insects. If you think you spot an infestation of hemlock woolly adelgids in an Adirondack eastern hemlock tree, you should contact the DEC at (518) 402-9425. Because they are easily spread through contact with mammals, you should not try to remove the wool sacs yourself, but instead report the infestation by using the form at www.dec.ny.gov/animals/82617.html.