Lakes, Rivers, and Other Waterways in the Northern Adirondacks

Below are bodies of water that are partially or entirely located in the Northern Adirondacks. This includes the Carry Falls Reservoir, Chazy Lake, the Ausable River, and more.

Before hitting the water, be sure to check local licensing and freshwater fishing regulations. Anglers must follow statewide and county laws that help to preserve these waters and their ecosystems for generations to come.

Note: the use or possession of bait fish is prohibited at some of bodies of water in Essex, Clinton, Franklin, and Saint Lawrence Counties, per the NYS DEC. 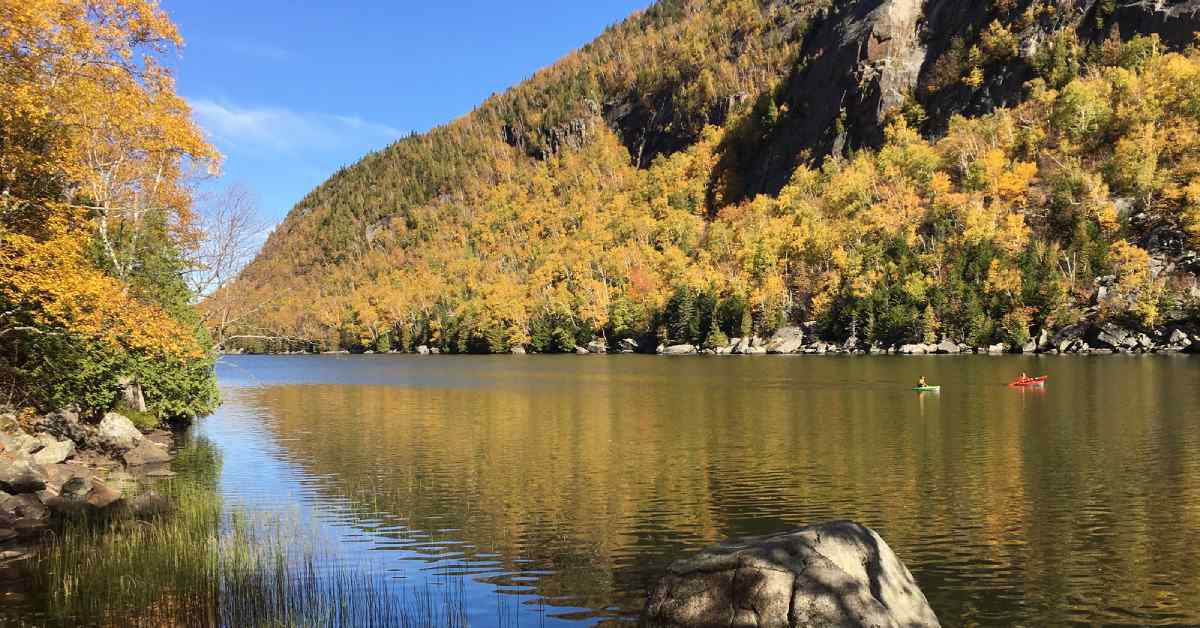 A large body of water on the border of New York and Vermont, Lake Champlain is an excellent place to visit in the northern Adirondacks. You can find public DEC ramp launches in Port Douglas and Peru. Anglers can fish for a variety of species, such as Landlocked Salmon, Pickerel, Smallmouth Bass, Largemouth Bass, Lake Trout, and Northern Pike.

The Ausable River is a tributary of Lake Champlain and has public fishing rights locations near Au Sable Forks and Clintonville. The river is stocked with Rainbow and Brown Trout, and in the spring and fall anglers have the chance to catch Landlocked Salmon near where the river meets Lake Champlain.

Taylor Pond's name is a little misleading -- at about 803 acres in area, with an average depth of 44 feet, it's actually more of a lake than it is a pond. Anglers can fish for Lake and Rainbow Trout, Landlocked Salmon, Rainbow Smelt, and more. There's a beach launch site at the eastern tip, but anglers, paddlers, and boaters should proceed with caution as the region is quite windy and can have rough waters.

The Salmon River has many public fishing rights locations near Peasleeville where anglers can catch Brown and Brook Trout.

Go fishing for Rainbow Trout, Brown Trout, Brook Trout, and Landlocked Salmon in the Saranac River, which flows out of the High Peaks and past Clayburg, Redford, and Saranac before emptying into Lake Champlain in Plattsburgh. Want to go kayaking? Some parts of the river are calm paddles, while others -- especially towards Lake Champlain -- can have challenging rapids, so make sure you plan your route ahead of time based on your skill level.

With 11 miles of shoreline and plenty of fish, Chazy Lake in Dannemora is a popular spot for angling and boating. The center of the lake is the best spot to fish for Landlocked Salmon, Lake Trout, and Rainbow Trout, but you can also find other species -- such as Northern Pike, Smallmouth Bass, and Yellow Perch -- in the waters. There is a ramp launch located at the northern end of the lake.

Located in Merrill, Upper Chateaugay Lake is a large body of water with an area of about 2,549 acres, 18.3 miles of shoreline, and one island called Moffitt Island. Anglers can hope to catch species such as Landlocked Salmon, Lake Trout, Rock Bass, Smallmouth Bass, Yellow Perch, Rainbow Smelt, Northern Pike, Brown Bullhead, and Pumpkinseed. Northern Pike were introduced illegally but are very abundant, with some growing to more than 15 pounds. There is a ramp launch located on the narrows between Upper and Lower Chateaugay Lakes.

Lakes and Rivers in Franklin County 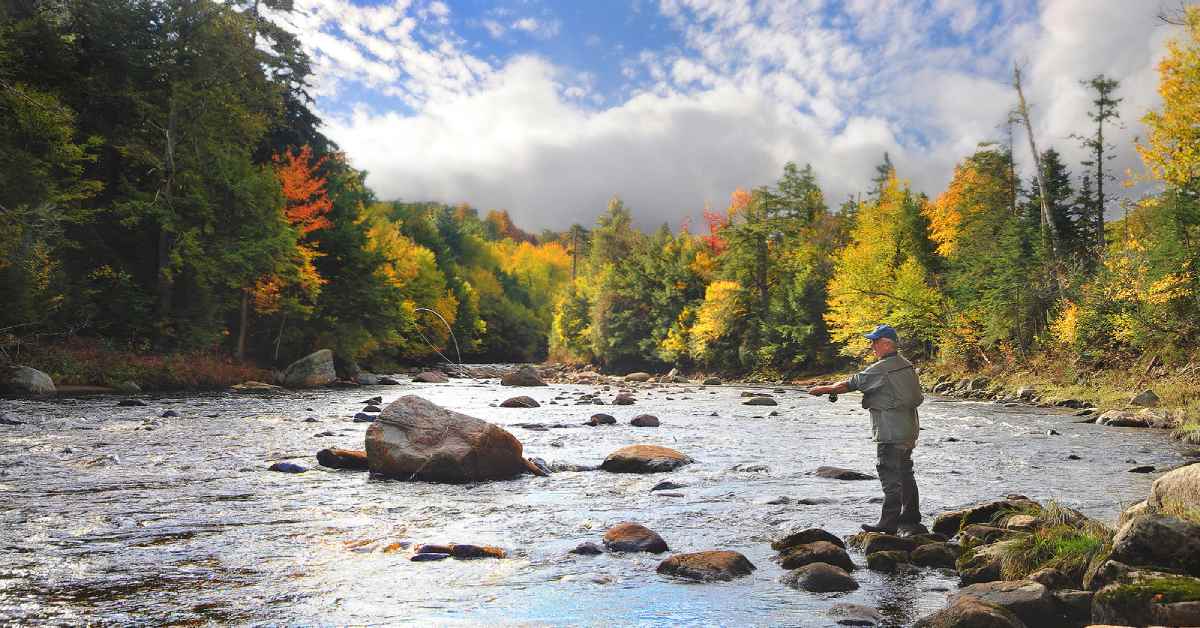 Located to the northwest of its sister lake, Lower Chateaugay is a narrow body of water that boasts a population of Brown Bullhead, Yellow Perch, Smallmouth Bass, Northern Pike, and Pumpkinseed. Although there isn't a DEC launch site on the lake, there is one on the narrows between the two bodies of water.

These two interconnected lakes in the town of Bellmont are located to the southwest of the Chateaugay Lakes. Mountain View Lake is long and thin, and features a population of Largemouth Bass and Northern Pike. Indian Lake is a round body of water and also a good spot to fish for Largemouth Bass.

The North Branch Saranac River is a nice place to fish for Brook and Brown Trout. This branch passes through the area between Saranac Lake and Dannemora. There are many public fishing rights locations, as well as state land where fishing is permitted.

Union Falls Flow is a man-made reservoir on the Saranac River. Anglers can fish for Walleye, Smallmouth Bass, Northern Pike, Fallfish, and more. As this is an impoundment, the underwater terrain is rocky, has stumps, and is difficult to see through the water, which can make it challenging for boats with outboard motors to pass through. There is, however, a rocky hand launch site on the northern end of the lake.

Go fishing for Lake Trout, Brown Bullhead, Largemouth Bass, Kokanee Salmon, and more in Lake Kushaqua, located in Debar Mountain Wild Forest. The lake is about 377 acres in area, has an average depth of 44 feet, and a center depth of 90 feet. There is a ramp launch located on the Kushaqua Narrows, which connects the lake to Buck Pond, the Rainbow Narrows, and Rainbow Lake.

Located at the bases of Debar and Baldface Mountains, this thin glacial lake is known for Brook Trout, Splake, and Landlocked Salmon fishing. Motor boats aren't allowed, but it's a scenic spot for paddling, with a short carry of about a third of a mile.

Meacham Lake, located southwest of Debar Mountain in the town of Duane, is undeveloped except for Meacham Lake Campground. It’s a great place to fish for Splake, Smallmouth Bass, and Northern Pike. For paddlers and boaters, there’s a ramp launch site on the east side of the lake at the state campground, and there’s also a hand launch site at the northern tip.

Go fishing for Brown Trout along the Little Salmon River, which is located just outside of the Adirondack Park. There are public fishing rights locations along the river’s main branch and the East Branch Little Salmon River in the towns of Skerry, Bangor, and Brushton.

The St. Regis River is part of the St. Regis Canoe Area. Along the river itself, anglers can fish for Rainbow Trout and Brown Trout at public fishing rights sites located near Nicholville, Fort Jackson, and Saint Regis Falls or in the Saint Regis River State Forest.

This body of water is the result of an impoundment in the St. Regis River. There’s a DEC ramp launch site located at the northern end of the reservoir. This section of the river is a great place to fish for Northern Pike. 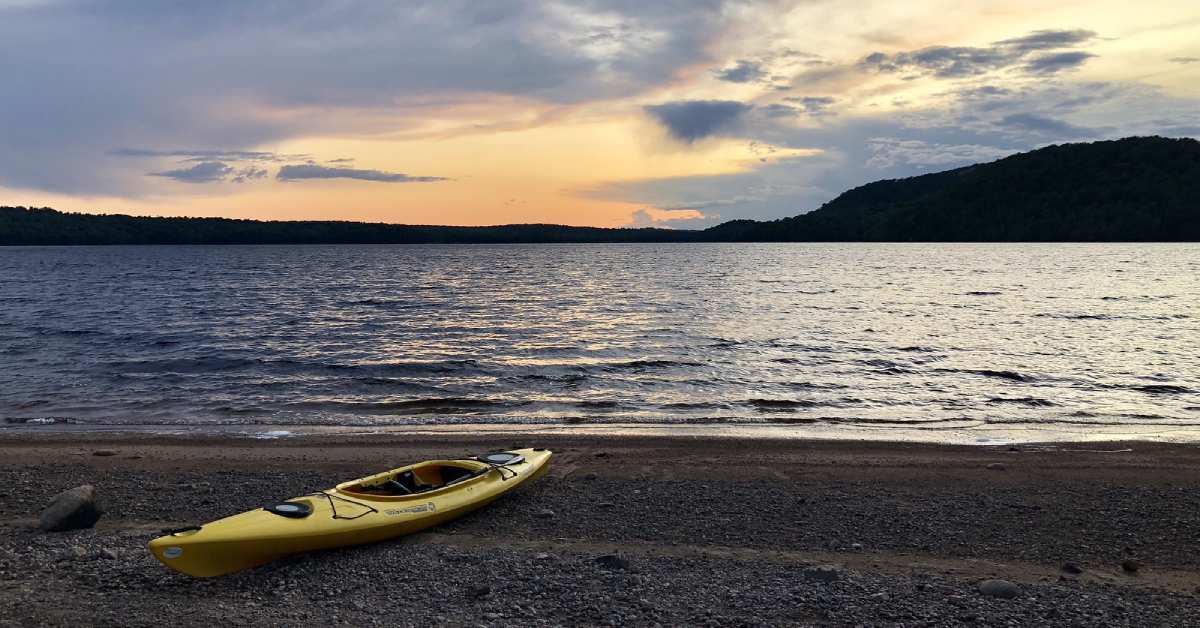 A 3,009 acre impoundment in the Raquette River, the Carry Falls Reservoir is an excellent spot for paddling and fishing. There is a ramp launch site located on the western shore, not far from the dam that separates Carry Falls and Stark Falls Reservoirs. Anglers can expect to see Smallmouth Bass, Brown Bullhead, Walleye, and Northern Pike.

Directly downstream from the Carry Falls Reservoir, Stark Falls is also an impoundment in the Raquette River. It’s only 650 acres in area, but it’s a great place to fish for Northern Pike, Yellow Perch, Walleye, Smallmouth Bass, and Brown Bullhead. There is a ramp launch located at the northern end of the reservoir.

This impoundment in the Raquette River is long, narrow, and about 739 acres in area. There is a ramp launch site located at the northwestern tip, and the waters boast populations of Yellow Perch, Smallmouth Bass, Walleye, Northern Pike, and Brown Bullhead.

This long, thin lake is about 405 acres in area and located in the town of Hopkinton. The shores of the wider, northern tip are somewhat developed, while the rest of the lake is largely undeveloped. The lake boasts excellent Splake fishing, but is also a good spot for Rainbow Trout, Smallmouth Bass, Atlantic Salmon, Brown Bullhead, and Yellow Perch. There is a DEC hand launch site on the northern shore.

This scenic river, which flows from Partlow Lake in the Five Pond Wilderness to the St. Lawrence River, has hand launch sites located in the towns of Edwards and Fine. Anglers can fish for species such as Walleye and Smallmouth Bass.

Map of Lakes, Ponds, and Rivers in the Northern Adirondacks